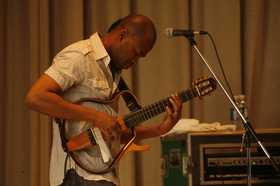 To the Lionel Loueke Trio at Bruce Eaton's Hunt Real Estate Art of Jazz at the Albright Knox yesterday. Probably jazz is America's greatest contribution to world culture, and Bruce has been booking acts that demonstrate that the world is giving it back; Loueke is from Benin, in West Africa, his drummer, Ferenc Nemeth is Hungarian, and his bassist, Massimo Biolcati is from Italy, and is half Swedish. So what does it sound like? Well, there is a recognizably African sound that runs through the blues. It is a guitar sound, mostly-- one of the ways that this music mutated when it came to the New World was that pianos came into it. You hear it in the way that the Reverend Gary Davis plays, and it runs through Muddy Waters and on into jazz. It's related to the "wild, mercury sound" that Dylan says he was trying for on "Blond on Blond", and it's in the South African parts that Paul Simon used on "Graceland" and that Peter Gabriel has employed in his world music experiments. Loueke has that sound, and it is interesting to think about the fact that the guitar-- a modified lute that was invented in Spain back before centuries had three digits-- has migrated around the world, and become the foundation sound of so many musical forms. So Loueke sounds like that, and sometimes he sounds a little like George Benson.