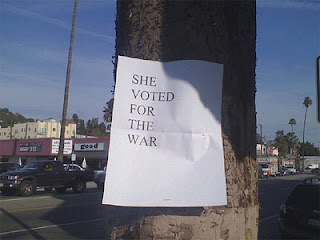 I was number 44 at my polling place this morning at about quarter to seven. We expected a line, but there wasn't one-- I don't know if that means anything. My college chum Joe Morelli was on the ballot as a Clinton delegate-- I wanted to vote for him, but went straight line Obama for maximum effect. Interesting to see that the Clinton delegates on our slate included the two most prominent African-American politicians in the area. Byron Brown and Crystal Peoples were both on the slate. It is also interesting that the Republican ballot doesn't list the delegates-- they have a winner take all system, so their vote goes into a black box, and Jim Domalgowski or someone figures out how they want to count them later, I guess. (Image via BoingBoing.)
UPDATE: I searched my archives to get a better sense of turnout in the Delaware District over the past few years. We generally vote first thing in the morning, so I don't know what was going on in 05. In 04 I was number 128 at 7:50 AM. In the 2005 primary I was 13th in line. In the 2005 General I was 497th (out of 909 registered) at 6:30. In 2006 we went in the morning-- I was number 84. Last year I was 37th.