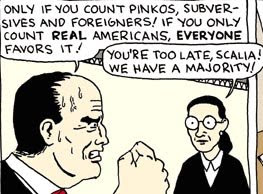 Judged a couple of moot court rounds this morning, this time the Herbert Wechsler National Criminal Law Moot Court competition. I like the inter-scholastic moot court competitions because the level of advocacy is strong, and because it is interesting to see how other law schools approach it. The cases are, typically, well outside any of the areas where I can claim to know what the hell I'm talking about, so I'm like a real judge, looking to be educated on the issues. I'd have liked a stronger bench brief today, but our topic happened to be something I've thought about: it was an Eighth Amendment question.

Eighth Amendment jurisprudence is a mess. You can't really be a strict constructionalist, because not even Justice Scalia believes in flogging (aloud, anyway). You can't really take any claim of objective standards seriously, because there are none that make any sense. All you can really do is admit that it is a good idea to be very careful, and that's no kind of guideline at all. The statute under question was a Louisiana law that makes the rape of a child under 12 a capital offense. It's been on the books for thirteen years or so, and so far only two child-rapers have been voted the big prize, but since the standard for evaluating the constitutionality of a punishment under the Eighth Amendment is whether the sentence is proportional to the offense, coupling a strict liability crime (sex with someone under 12, whether the offender knows the victim's age or not) with the most severe punishment available presents something of a problem with respect to proportionality. There is an obvious solution, but the Supreme Court is not likely to say that capital punishment is a sick and degraded practice. As a result, we are likely to see a bit of tortured jurisprudence coming out of the actual case, Kennedy v. Louisiana. Watch for it.

I like lists, and I thought the list of states that have capital child rape statutes was interesting: Texas (of course), Oklahoma (big Texas copycats), Louisiana, (apparently it is something of a regional issue), South Carolina (why don't they just adopt the Saudi Arabian Criminal Code and be done with it?), Montana (help me out with a joke in the Comments if you have one) and one other that I can't recall at the moment. Florida had one, but its supreme court struck it down. Nice work, when the Florida Supreme Court says a capital punishment statute is too much- you don't see that much.