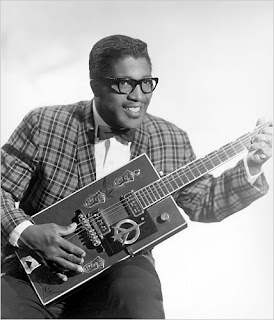 The Bo Diddley beat is so primal that it's a little odd to think of it as having been invented, but it was, and it's inventor died today.

Buddy Holly’s “Not Fade Away,” Johnny Otis’s “Willie and the Hand Jive,” Steppenwolf’s “Magic Carpet Ride,” The Who’s “Magic Bus,” Bruce Springsteen’s “She’s the One”, U2’s “Desire”-- think about the songs that Bo Diddley didn't get credit for writing. “I opened the door for a lot of people, and they just ran through and left me holding the knob,” he said 2003. Big props to The Clash, who had him open for them on their first US tour. Bo Diddley was one of the inventors of an American art form. Thanks, Bo.