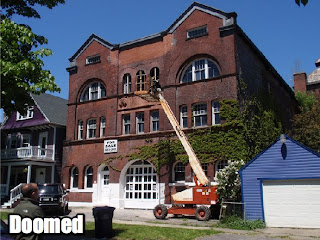 Last evening I had a meeting down by Kleinhan's, so I took a moment to ride my bike past White's Livery on the way. As it happens I was only familiar with the back of the building before this, but these past few days this formerly obscure structure has been the topic of a fair amount of discussion.

The building is in much rougher shape than the photographs at Buffalo Rising and elsewhere suggest. 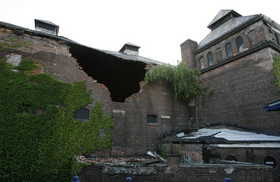 The story I get from a former neighbor is that years ago the owners wanted to develop the property into apartments, but that the neighbors blocked city approval of the plan due to parking concerns although the actual issue for many was privacy. Behind the stable there are three or four cottages, off the street, accessible only by a footpath, with a gate at the end. The occupants of the cottages, which are charming (and have included some interesting people over the years), didn't want the windowless rear of the building to be modified to look out over their yards and houses.

As for privacy, it is a city neighborhood. There'll be less privacy now, with a big open lot where the structure was. It is hard to know what else the building might have been used for. An office building would have presented the same parking issues, and the same privacy issues, for that matter-- you have to figure that people are going to want more windows than the horses were prepared to settle for. It is also not well situated for an office building-- it is smack dab in the middle of a residential block, with nothing else of a commercial nature around anywhere. We may well be heading back to a horse-based transportation infrastructure, but this building isn't going to survive that long, so it's original use is probably out as well.

Buffalo is far from unique in its resistance to change-- what makes this city unusual, I think, is that the reactionary mentality is so frequently what prevails. The ultimate result is decay, rather then renewal. There are a number of reasons for this-- the declining population base means that (a) there is less pressure to change; (ii) scarcer resources to bring about change; and (3) the population is old, and conservative. There is a history of bad choices which brought about bad results. People are afraid to make more bad choices, and so make none. Leadership is in short supply-- there does not seem to be a vision of Buffalo that anyone can agree on. Instead of planning on what to become, the population here is instead consumed by nostalgia.

One of the things that makes this particular episode interesting is that it is happening in a part or the city where all of this is still somewhat unusual. There are neglected, decaying old buildings everywhere in Buffalo, of course but it only gets attention when it happens in white, affluent neighborhoods- and those are pretty much the neighborhoods with the clout to block development. An interesting paradox, when you think about it: the desirable neighborhoods for development are the ones that are most likely to resist it, and the best equipped to resist it as well. Meanwhile, east of Main Street, the buildings just fall, like trees in the forest.

It's a pity. The building would have been an attractive apartment conversion. Instead it has been falling apart for years, a roost for pigeons, and no doubt other vermin as well. It is sweet that the neighborhood wants to save it now, although it is worth noting that nobody is stepping up with their own money to do it.