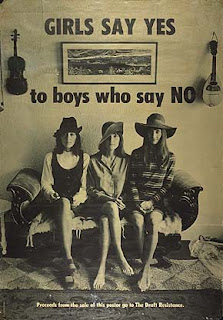 I'm just shy of old enough to remember this poster, I think, but it is now officially my favorite thing about Joan Baez. Or Mimi Farina, for that matter. I like the update too. It is interesting that sex and sexuality have played such a big role in this election-- HRC, of course, and the Obama Girl. I guess it got overheated with the selection of Governor Palin. It would take a more astute cultural commentator than I am to tease the meaning out of all this-- the fecund former beauty queen with the expensive wardrobe, the Kennedy-esq youth and vigor of the Harvard educated Democrat. What troubles me is that it all resembles 60's Culture Wars redux, and the poster brings that home. The promise of the Obama campaign that has the greatest appeal to me has been the notion that we might get past that. Obama is not a narcissistic Baby Boomer, and hasn't seemed interested in revisiting those fights. Dragging the Weathermen into this 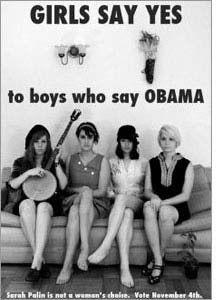 election hasn't worked, even as 60's nostalgia. It seems to me that we would be well advised to put the 60's away, but I wonderif that's what's going to happen. I thought it was a positive development when, during the third debate, the two candidates clearly stated their positions on reproductive choice. There was none of the tip-toeing around that has characterized the discussion of this issue in the past. McCain is against it, and said so, and Obama is in favor, and likewise said so. McCain has been on the Hill for so long that he got tripped up on the "litmus test" question, but we knew what he meant. It will be very difficult after this for anyone to argue over what the majority of Americans think about this issue, and the Supreme Court will undoubtedly notice this. Johnson and Nixon were both brought down because they couldn't think of a way out of Vietnam. Their mistake was that they looked to the past for a template, and there wasn't one. Vietnam was a new thing, a proxy war in the post-nuclear age, and they lacked the creativity to deal with it. Similarly, the economic meltdown that we are now in is different from anything we have ever seen-- it is a collapse of liquidity and credit in a global economy, a completely new thing. My sense is that Obama recognizes a truth about America that McCain would never be able to acknowledge-- that ending the Iraq war, and addressing the problem of global terrorism, and restoring the world's economic health are all things that can only be done if we are able to find ways to cooperate with the rest of the world. The notion of American Exceptionalism is a big part of how we got into this mess. Getting out is going to be a bitch. The Republican Party is bottoming out at just about the right time. If we can confine the sniping and the backbiting to the 20% or so that think George W. Bush is doing a hell of a fine job than maybe we have a chance of getting somewhere, but we aren't going to be able to do that if we behave in victory the way that they have.