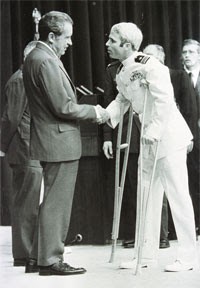 The Observer reports that "During the first presidential debate in Mississippi, [Mccain]persistently avoided eye contact with Mr. Obama despite the moderator’s entreaties for the candidates to engage directly with one another. Mr. McCain’s advisers said afterward that he had done so deliberately in order to avoid becoming enraged."

Cindy McCain says that Obama has waged the "dirtiest campaign in American history."

I guess it's the arrogance I don't understand. I can understand being upset over seeing the Presidency slipping away, but what exactly has Obama done that can be considered "dirty"? And how dare McCain be angry? Can he possibly think that he is losing to someone who is less qualified than he is? McCain's qualification for the office amounts to being marginally less partisan than most Senators. Does he seriously think that he is more intelligent than Obama? Or more popular? Objectively speaking he can't believe the latter, because fewer people are going to vote for him. Does he think that hanging around Washington for thirty years has made him smart? Because he doesn't say that-- he says just the opposite.

Stupid, dirty-pool Democrats, being all smarter and more popular than me. How 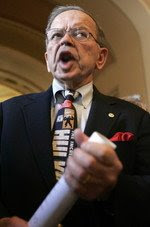 rage-filled they make me! Maybe I can ask Sarah to borrow Ted Stevens' Hulk tie for the next debate.