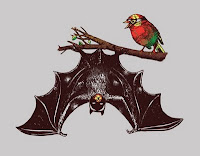 The other night I was sleeping the sleep of the innocent when I was jolted awake by A's elbow. "There's something flying around," she said. As consciousness gradually dawned I saw that, in fact, there was something flying around-- and it appeared to be quite a bit bigger than anything I was eager to engage. "Pull your covers up," I counseled, and rolled over. "What is it?" A. asked, prodding me with her elbow again. I rolled onto my back and studied the apparition further. It was silent, and although it looked about as big as a pterodactyl I thought that it probably wasn't. "It's a bat," I said. "Ignore it and maybe it will go away." This answer did not satisfy A., even though she had followed my earlier suggestion about pulling up the covers. "What are you going to do about it?" came the voice from under the bedclothes. I considered my options. I wasn't sure where to lay hands on a tennis racket at that hour, or a butterfly net. Perhaps I could chase it around and try to throw a towel over it, but that left the question of what to do with a gigantic bat under a towel. I knew that I would be unable to enlist the assistance of the cats; although their ostensible purpose for living under our roof is vermin prevention, neither has ever shown much aptitude or enthusiasm for the tasks associated with this important role. I considered calling Pest Control, but I'm not actually sure there is such a thing in Buffalo, and I'm pretty sure that they wouldn't be likely to make a 3:00 AM house call. The bat circled, occassionally swooping lower, just to keep my attention focused.

The resolution to the situation proved surprisingly simple. I went over to the far window-- that is, the window the farthest from A--, pulled aside the curtains, and opened the screen as far as it would go. Our bat pal, using its bat radar sense, recognized the opening and flitted past me out into the night.