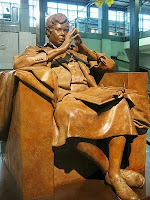 The first bit of public art you encounter at the Austin Airport is this statue of Barbara Jordan. Later, when I went for a run on the Lance Armstrong Bike Path I saw a statue of Stevie Ray Vaughn. They say Austin is in Texas, and the university is there and all, but none of that is what I expect from the Lone Star State.

Damn fine barbecue brisket at Stubbs-- that I expected.