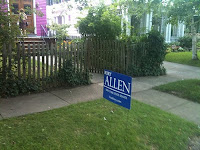 In my basement there is a collection of lawn signs, a sort of museum of the quixotic. We have never had a winning candidate advertise on our lawn, a pretty remarkable streak when you think about it. Rory Allen's sign joins the gallery today.

I wonder if yesterday really was a manifestation of anti-Albany sentiment. The perfectly odious Bill Stachowski, a 28 year veteran of the state senate was the only local incumbent legislator to lose. That's not really pitchforks and torches, you know what I'm saying?

Of course there's Carl Paladino. Carl ran a frothing at the mouth campaign against a guy with an established record of unpopularity for the chance to get flattened by Andy Cuomo. I haven't seen the numbers yet but my hunch is that the Lazio voters just stayed home. Paladino is a tea party success story, no doubt about that, but I'm not so sure that his support is as broad as it is deep. I'm wondering if he can keep the Republican line second on the ballot -- and I'm thinking that this might be the end of the Conservative Party line. Carl has his own third party line, and the Conservative Party didn't back him- they went with Lazio.

| Comments:
Never did like Rick Lazio who presumed far too much too early in his up and down career in politics. I gather he made some serious $$ as a lobbyist when the Repub.s were in power, tho'. Guess he used some for this campaign.

Luckily, there will be a better choice in November than Lazio's tea party backed opponent.

Did you all get to vote on the really stupid, new, electronic machines that were used in NYC and on LI? J got home after midnight with those really poorly designed machines. She thought people would do ok with them. Wrong! A clue should have been that the poll workers had to attend 3 training classes. For the ones we have here, only one class was needed when our kind of electronic machines were introduced. We've been using them now for about 5-6 years and STILL we have folks who screw up.