Well, won't this be a merry Hot Stove Season! Here are the candidates on this year's HOF ballot:

I'm conflicted a bit. Baseball's HOF criteria include "the player's record, playing ability, integrity, sportsmanship, character, and contributions to the team(s) on which the player played." For me this has always meant that mere number-crunching is insufficient; on the other hand, I am leery of the idea of sportswriters acting as moral arbiters. The complaint about statistics inflated by PEDs bothers me less-- players play under the conditions prevailing at the time, which means that there are a lot of HOF ballplayers who ran up their numbers because they didn't play against some of the best of  their time. The system is flawed, and the best that can be hoped for is that it works as well as possible. The fact that Marvin Miller isn't on the list tells us just how ultimately trivial the whole thing is 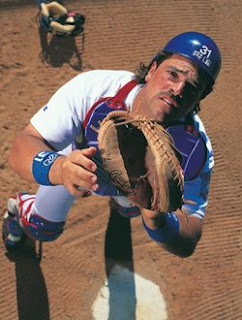 The rules say that voters can cast ballots for none, some, or up to ten candidates. No write-ins are permitted, so Miller's death changes nothing. It would be a nice gesture if the Hall voters inducted him posthumously, and it would be cool if he were the only one elected this year, but neither is going to happen.  My thinking about the HOF has evolved in recent years, and I now believe in an inclusive Hall. If I had a ballot I'd use all ten votes. I have never thought that t made sense to withhold the honor from first time nominees-- the idea of a "First Ballot Hall of Famer" is completely artificial. The first place I'd go to, therefore, are the names that have been passed over, and the first box I'd tick would be Tim Raines. I'd go to Jeff Bagwell next. My pencil would hover over Mark McGwire. Frankly, I always thought of him as a one-dimensional, Dave Kingman sort of player, but I have come to be persuaded that he was much better than that, and I think it would be unfair and stupid to single him out and scapegoat him for using drugs when drug use was so common. Edgar Martinez is in too. He was terrific.  Barry Bonds? In. I will remember every plate appearance of his that I ever saw, from his Pirates days to the end. Gotta vote for Dale Murphy, I think. Mike Piazza? Absolutely. Best hitting catcher ever, and a classy guy. Of course, Piazza will be forever linked in my mind with Roger Clemons, and now I have a dilemma. Having said that the PED thing isn't going to affect my vote, what do I do with The Rocket? Bonds' conviction for obstruction of justice is on appeal, but Clemons was acquitted. Clemons was matchless on the mound, but I hate him. In the end I think I will allow the system to do with him what it likes. He threw that broken bat at my guy, Mike Piazza, so screw him, he displayed bad sportsmanship. No vote for him from me. That leaves me with four more votes. I'm going to spend them all, but I want to think about it. I'm pretty sure I will not vote for Curt Schilling, on the theory that if Clemons gets in and Schilling doesn't Schilling will spew some pretty funny bile. That might be reason enough.