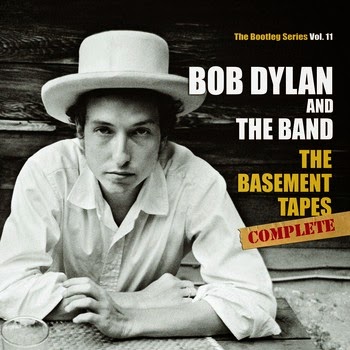 We are going to have to wait for the album of standards, but what we are getting instead is pretty exciting: the "Complete" Basement Tapes. Finally we will be able to read Greil Marcus' Invisible Republic and listen to the music he's writing about. I doubt that I will understand Invisible Republic any better, but that's my problem. People who have heard all of these songs-- who, for all I know may just be Greil Marcus*, say that it is mostly all pretty great, and  essential. It's funny that some of the immediate response seems to be mild complaining that this edition of the Bootleg Series is not the unreleased Blood on the Tracks stuff; most of that has seen official release here and there already.

* And Jann Wenner, too. When The Basement Tapes was originally released in 1975 it hit number 7 on the Billboard chart. Dylan expressed surprise, since the material had been widely bootlegged on the Great White Wonder: "I thought everybody already had those songs."