I'm very pleased to have been appointed to the faculty of the Political Science Department at Buffalo State College, where I will be teaching Constitutional Law. It's a part-time gig, but it is extremely flattering to have been asked, and I am looking forward to it a great deal.

We have two interesting stories that seem to be coming to an intersection here in the Queen City of the Lakes. The first one has already attracted the attention of the national sporting press, and the second is representative of a particular interest to us at Outside Counsel.

First story first. Patrick Kane is a young hockey player for the Chicago Blackhawks. He is a star, and he is a hometown kid who still lives in South Buffalo. He's been in some scrapes with the law in the past, and this summer he is accused of meeting a woman in a bar, inviting her to his home, and raping her. The case is presently under investigation, but it seems to have taken an odd course-- the Grand Jury was suspended, which is something I've never heard of happening, and now it appears that the rape kit evidence bag  was anonymously delivered to the mother of the accuser, and had been ripped open. As it happens the lawyer for the accuser is a classmate of mine. He is a pure criminal defense lawyer- if there is some sort of civil settlement in the background I think it is unlikely that Tom Eoannou is engineering it. Pat Kane's lawyer, as long as we are filling out scorecards, is Paul Cambria.

Meanwhile, the Erie County District Attorney,Frank A. Sedita III, is expected to be cross-endorsed by the Republican and Democratic parties for a Supreme Court judgeship. The cross-endorsement means that he is running unopposed, and came with the quid pro quo of a second cross-endorsement of a Republican lawyer who is one of the few lawyers in this story that I am not acquainted with. Frank Sedita is the son of a judge, and the grandson of a past mayor of Buffalo, so he's not what you'd call an obscure figure. Mr. Sedita has a somewhat unsavory habit of soliciting campaign contributions from his deputies and assistants, and it is said that he has accumulated quite a haul. It is also said that this accumulation was very persuasive when he was lining up his cross-endorsement deal, and one can see how that might have been the case-- although he had not declared at the time the Erie County Bar Association undertook to evaluate him. The Bar Association used a four point scale: Outstanding, Well Qualified, Qualified and Oh Hell No Not Qualified. Frank is Qualified.

You see where this is going, I'm sure. We are about to see a local political figure-- a candidate for a judgeship, for crying out loud-- embroiled in this season's ugliest sports scandal. It is fascinating to speculate about who will blink first. Will it be Erie County Republican Party Chairman Nicholas A. Langworthy? Will his Democratic Party counterpart, Jeremy Zellner, decide that he doesn't want this stink on his clothes? It would be irresponsible not to speculate that Frank Sedita himself might back off, but I think he's the least likely to display a modicum of shame.

Further updates as warranted
UPDATE: Last night  Tom Eoannou withdrew as attorney for the accuser. I'm watching Frank Sedita's Presser right no. It looks like the bag was from the hospital- not an evidence bag. Apparently the last person known to hav the bag was the complaint's mother.
// posted by Bill @ 8:01 AM 0 comments

Yogi Berra was pretty amazin'. EGC tells a story about her time in western China: there were two books in English in the village where she was staying. One was Moby Dick, and the other was a book of Berra quotes. I like to think about that bit of cultural penetration sometimes: the local population didn't even speak Mandarin, but there was Yogi. 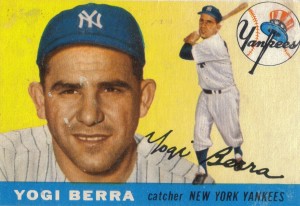 I'm confused about this story, from the NYTimes obit:

In September 1951, once again on the brink of a no-hitter, this one by Allie Reynolds against the Red Sox, Berra made one of baseball’s legendary errors. With two out in the ninth inning, Ted Williams hit a towering foul ball between home plate and the Yankee dugout; it looked like the end of the game, sealing Reynolds’s second no-hitter of the season and making him the first American League pitcher to accomplish that feat. But as the ball plummeted, it was caught in a gust of wind; Berra lunged backward, and it deflected off his glove as he went sprawling.

Amazingly, on the next pitch, Williams hit an almost identical pop-up, and this time Berra caught it.

That almost sounds as though Williams broke up Reynolds' no-hitter, but if the first pitch was hit foul, and the second was caught then Williams was out, and the no-hitter was still alive. In fact, it was the bottom of the ninth with two out, and Reynolds got his no-hitter.

Yogi Berra was a pretty remarkable guy. It goes without saying that he was a great athlete, but  he also had a great temperament: he was a lot more intelligent than he got credit for, and rolled with a lot of other abuse that by contemporary standards seems gratuitously cruel. He seems to have enjoyed his life, and good for him; we enjoyed it too.

I think this is kind of mostly true, but I also think that it underestimates Chuck Berry, who expresses a vision of America (that he couldn't even fully participate in) in as pure a poetic vision as William Carlos Williams. Rock and Roll was an art form as soon as Chuck turned Ida Red into Maybellene.

A nomenclature note: in Europe the term is "migrants"; in the US it is "illegals", or, only slightly less horribly, "illegal immigrants". (I need not point out to you, gentle Outside Counsel reader, that defining someone by their status is dehumanizing and wrong-- you already understand that this is why it is said that way.) Another thought: as a general proposition economies that don't grow stagnate and decline. What Europe has here is an opportunity. It's population has been declining for the past three or four generations. Questions of cultural identity aside (whatever "cultural identity" means) it is being presented with the solution.

I can't recall if I've posted this before, but it is perfect: Tommy James at the Bitter End, "Dragging the Line".

"[A]ll mammals above 3 kg in weight empty their bladders over nearly constant duration of 21 ± 13 s."

I have confirmed this by personal experimentation and observation.

Every now and then I meet someone who I can't figure out. "There must be more," I think. "What lies beneath that exterior that I'm not seeing?" Frequently in this situations I will ask someone who knows the person better, and very often what I'm told is, "That's it. What you are seeing is what X is like."

This is not to say that these Sphinxes have no rich inner lives, or that their lives aren't as complex or messy as anyone else's-- it is just that sometimes I can't see what the person is actually like. It is a blind spot -- which means that the issue is my perception, not some mysterious attribute of the person I am trying to understand, and certainly not a willful effort on the part of that person to be pointlessly obscure.

I think something like this may be why so many people seem to have a Hillary Clinton problem. (I also think that the problem many, many people have with the Clintons generally is, at base, a Hillary Clinton problem, but that's a different discussion.) I am hard pressed to think of a public figure that we know more about, and yet here we are, puzzling over the question. Dude, we know what she's like, and there really doesn't seem to be anything sinister or twisted about her, except for the part about her wanting to be President. That part-- the idea that she has the focus and energy to work towards that goal-- is a little hard to get one's mind around, but it's hardly a unique quality. As we speak there are quite a few people running around who want to be President. Does anyone compare Lindsey Graham to a Shakespeare villain? In fact, in my life I've known quite a few people with a singular focus and determination, and although some of them have been artists, most of them were merely focused and determined to make money. Hillary Clinton is not an ordinary person-- whatever that might be-- but she's pretty open about her life, even though being open is a potential vulnerability, and even though being open has got to have caused her a great deal of personal pain.

I'm not over the Iraq War vote-- that was a bad choice, and it was made, I think, because she didn't want to be criticized down the line. Oh well, that fear is responsible for a lot of bad choices that people make, perhaps especially United States Senators. Iraq War vote notwithstanding, there is no call that I can see to think that Hillary Clinton is some kind of Lady Macbeth, and I'm surprised that so many people seem so confident that their blind spots about her are really some sort of penetrating insight. She is all there, in front of us, an open book.