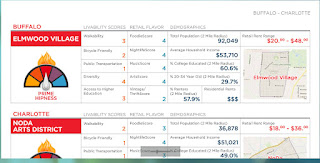 Cushman & Wakefield's list of the 100 Coolest Streets in America. Yeah, Elmwood is on it, are you kidding?

My recent adventures in land use and zoning issues (don't ask) have made me more attuned to what makes a city neighborhood work. I am also sensitive to the ways in which poor planning can wreck an urban environment. Elmwood has never had many chain stores-- there's a Starbucks, and there used to be a Blockbuster Video and for a long time that was it. Now there is a Panera Bread shop, and across the street, in what is universally called "the new, ugly building" there is a Jimmy Johns. Walking down the street Saturday A and I noted that there was nobody in the Jimmy Johns shop, but that the tables were full at the small, locally owned Globe Market next door. In fact, I have never seen anyone in the Jimmy Johns. This troubles me. If the Jimmy Johns collapses, what will fill that space? In days of yore some sort of cool retail might go in there, but I'm not so sure that the rent wouldn't price something like that off the market. We are in an unusual situation in Buffalo-- at least, for Buffalo. Things are being built, and real estate is booming, but I wonder how sustainable it all is. Regrettably, the governmental institutions charged with regulating this sort of thing are giddy over the prospect of developers' money coming into the city, and are not inclined to say no to much, if anything. As I frequently tell people, when we moved to Buffalo my stipulation with A was that I had to be able to walk to the corner to buy a newspaper, and Elmwood has always been able to do that for me-- but when we moved there it wasn't making any national lists of cool streets. It became what it is today by being small and by hosting local businesses, and local attractions.