I keep thinking I should read Tom Wicker's book about Attica. For now, this

It is unusual for me to be on the pointy end of a public policy debate  in my practice, but I kept a man from being deported today, and it may be the best thing I've ever done with my license.

The man's story is interesting, but it is his story, and doesn't bear going into here. He deserved cancellation of removal and was an excellent client to work with, but as we all know the cases you are supposed to win are sometimes the hardest. What was interesting about the experience was the insight it gave me into the immigration debate.

Going in I gritted my teeth and started gearing up for a battle against the forces of injustice. Immigration Court is an Article I court, for openers, and both the judge and the prosecutor are Department of Justice employees. This was enough to make me suspicious of the process, but I was wrong. What I encountered at every stage-- the staff at the detention center, the clerks office, the lawyer for Homeland Security, and the two judges- the judge at the bond hearing and the judge that heard the case-- were people who were professional, patient, and a pleasure to deal with. The rhetoric that surrounds the debate over immigration policy had led me to believe that I would be dealing with people who would not be abashed at mass deportation. This was not at all the case. In fact everyone I dealt with recognized that the human cost involved in the process was incredibly high, and behaved the way you would hope people would behave under those circumstances. The Detention Center, which is in the middle of nowhere, was nothing like any lock-up or prison I've seen, and the Homeland Security officers were polite and respectful. The people who work in the system are not the people who are driving the debate on this-- they get it, in a way that very few others seem to.

My client had been scooped up and taken into detention, so the first order of business was to get him released on bond. The process is not real expeditious, which I'll come back to, but when we had the parole proceeding we managed to get him released. (Bond was not inexpensive, but he had friends who helped him out.) That was a pretty big win at the outset, for a number of reasons. Most importantly it got him home to his pregnant wife.

The statute I was working with  - § 240A (a) of the Immigration and Naturalization Act, is unlike anything I've ever worked with before. There is a technical requirement-- the deportable offense must have occurred over five years ago, which tells you something interesting right there. If you meet that, then, although the petitioner has the burden of proof, the relief, cancellation of removal, is entirely in the discretion of the court. Conceptually I am not sure what that means with respect to the petitioner's burden. Don't leave anything on the table is what I took it to mean.

Something else that bothered me was the application of the Sixth Amendment to this process. Basically, persons who are the subject of deportation proceedings have a right to a lawyer, but that right doesn't extend to providing a lawyer if the person cannot afford one. That's pretty thin gruel if you ask me. These are not criminal proceedings (a fact which many people can't seem to get their heads around) but they absolutely affect one's rights and liberties. In my view meaningful Due Process means you get a lawyer, and although I am mindful of my professional obligation to serve the community on a pro bono basis, a full-blown trial, which requires investigation, exhibit preparation, briefing, witness and client meetings and all the rest is something that should be compensated for. I am told that there is a severe shortage of lawyers who will take these cases, and I know why. My long history of windmill tilting means that I'm not complaining about this personally-- but the system deserves better.

And that, I think, is my ultimate point. To those who are clamoring for deportations and opposed to paths to citizenship and the rest, leaving aside the merits of your policy demands (which impress me as cruel and wrong-headed) what you are asking for isn't something that can be accomplished so easily. You need more enforcement agents-- a lot more. If you travel, or if you live on an international frontier you will experience a lot more personal inconvenience. We are going to have to build a lot more detention centers. You are going to staff those detention centers. From what I could see, the Immigration Courts are operating at capacity, so you'll need more lawyers, more judges, and more courtrooms. The process takes a surprising amount of time-- and that's expensive. If you assumed that the judges and the Homeland Security lawyers were being compensated at my usual hourly rate this case probably cost something in the low six figures to try. That's leaving out the staff, and the security, and all the rest of it.

Is that how we want to spend resources? I don't. We won today, which means that everyone in the room got to walk away with the feeling that justice was done. That's pretty rare, and I'm pretty happy, but the larger issues are still out there, and I can't help but feel as though the larger issues are being debated by people who don't have a clear understanding about what it is that we are talking about.

One other thing. I got help on this matter from the Volunteer Lawyers Project, and specifically a staff attorney there who was terrific.  I am very grateful for the assistance, and for  the existence of  this resource.

Well, this is kind of interesting. Forbes has assembled a list of each state's favorite vinyl albums from 2016 based on eBay sales figures. The methodology: "Favorite" means the album a state buys at the highest rate compared to that state's total share of the volume of records purchased. Some examples:

Goats Head Soup shows up kind of a lot, and I can't imagine why. To me it represents the start of a creative ebb for the band.

No love for "Dust in the Wind" Jayhawk State?

Proof that Louisiana ain't all New Orleans, I guess.

Maybe this means that everyone in Massachusetts already has all of Aerosmith and J. Giles on vinyl .

Makes you think, doesn't it?

Okay, this is respectable.

This is a weird combination.

The Political Science Department at Buffalo State is sponsoring a semester long project called The First 100 Days, which will consist of a series of lectures culminating with a day long series of presentations on April 29, 2017. I'm flattered to have been asked to address Judge Gorsuch's nomination, and the Supreme Court appointment process. 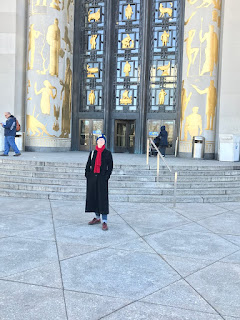 In Brooklyn over the weekend, and Boots and I went to the Brooklyn Public Library, mostly to visit the space, which has a family connection. The entrance is framed by gilded representations of literary characters, many with Brooklyn connections, some not. Tom Sawyer, Moby Dick, Walt Whitman.... and Archy and Mehitabel. Nobody in my family knew who they were, but because I secretly grew up in the 20's and 30's I do. A columnist for the Evening Sun named 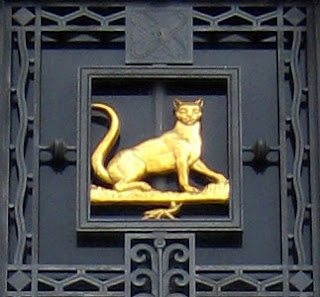 Don Marquis created them. Archy was a free verse poet reincarnated as a cockroach, and Mehitable was his friend, an alley cat. Marquis would leave a sheet of paper in his typewriter, and in the morning he would find a poem or a story that Archy had written by throwing himself onto the keys. Since he couldn't work the shift key, Archy's writing was always in lower case. The series was really popular, and is now pretty much completely obscure. It was an odd sort of literary moment for me, to be one of the very few people within what I would guess to be a fair-sized radius to know about this writer and his characters.