Andrea on the radio (kinda), What Have You Done About It?

Someone left a bag of groceries hanging on our fencepost: some canned goods and a bag of cherrios. It was there for several days, and today when I saw the next door neighbor I asked if she knew anything about it. She didn't, so that made two of us. I mentioned it at dinner, and asked EGC if she'd take it to the shelter where she volunteers.
Bill: I'm sure Chris thinks I'm using to lure hobos.
CLA: If you don't want people to think you're a serial killer you shouldn't dress like a clown.
Bill: If I was worried about people thinking I'm a serial killer I wouldn't use cheerios as bait.

For some reason I was invited to participate on a panel at Buffalo State following the screening of Free Angela and All Political Prisoners last night. Of course I said I'd do it: I seldom need to be asked twice about that sort of thing. I love feeling like Norman Mailer in the beginning of Armies of the Night even though I don't act like that. Still, being the only old white guy on the dais was kind of odd. 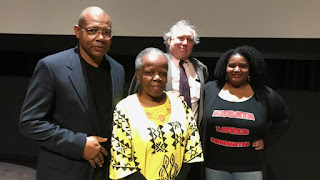 The movie itself was quite good. I was familiar with the broad outlines of the story, of course. Davis, who Ronald Reagan's Board of Regents had fired from UCLA because she was unabashedly a member of the Communist Party, was involved with the defense committee for the Soledad Brothers, three inmates who were charged with the killing of a corrections officer. Davis developed a friendship with George Jackson, one of the three inmates, and through him became friendly with his brother. She'd been receiving hate mail and threatening letters and bought some guns for personal protection. Jackson's brother -- who was, I think, 19-- used the guns that were registered in Davis' name to bust the Soledad Brothers out while they were in court, taking the judge and the ADA and some jurors hostage. That plan went about the way you'd expect, and Davis went to ground. Kids, when you are implicated in a crime, the 'A' answer is probably to talk to a lawyer. In any event, following a nationwide manhunt she was captured and extradited to California, where she was tried and acquitted. (In the grand California tradition the prosecution over-tried its case, which went on for months. A five day trial that omitted the politics and the rest of the atmospherics might have gone differently, although the defense team did some really fantastic work as well.)

It is tempting to think of this outcome as the system working the way it is supposed to, but  I think the larger take-away is that the system worked the way it always does, and Davis' outcome is just a outlier in the overall story. George Jackson was shot down in a prison yard while Davis was awaiting trial. He was in prison in the first place on a $70 dollar larceny rap, and had spent seven years in solitary. Davis, a real-deal intellectual, was in fear of her life because of her exercise of her free speech rights-- and that fear extended to a legitimate fear that she might meet Jackson's fate at the hands of law enforcement.

At various times in my life I've enjoyed card and board games. I went through a big backgammon phase, for example. Trivial Pursuit was consuming for a while, and Risk. I drifted away from this, but I'm thinking that it would be fun to try All In Your Mind, a card came that is played in conjunction with  another game. The rules seem simple: everyone is dealt two cards: a Therapy card and one of five Mind Game cards which tell you what mind game to play on the others: gaselighing, guilt tripping, passive aggression, victim blaming and self-sabotage. There are also three "no game at all" cards. The object is to figure out what game, if any, the others are playing. This sounds hilarious, and quite likely to end in tears and broken friendships.

Stephanie Clifford seems to set up a dilemma, and as is common with Democratic dilemmas it is a Clinton dilemma. How can I distinguish ol' Bill's dalliance from President Trump's pre-Presidential sexual transgression? Certainly it is true that Clinton took advantage of the power disparity with his affair, and, oddly, Trump just seems to have thrown money around (and not that much of it). On its face that should make Clinton the worse transgressor, and maybe that's how it shakes out by some measure, but I think there is a difference, and the difference is notable. Both Clinton and Trump have large sexual appetites, but we expected more from Clinton. We expected that his intelligence and passion for policy, the things that defined him as a President, would allow him to overcome- or us to overlook-- his other defining quality, and when that didn't happen we felt betrayed. He'd permitted his tragic flaw to become the focus of his Presidency, undermining all of the decent things he'd done, or was trying to do.

Trump is just being Trump. His narcissism and his shallow nature are exactly what anyone who has walked by a newsstand in the last 40 years knew we were going to get, and frankly I don't know that we will ever see the bottom of this barrel. It doesn't matter, really, because his presence in the White House is a powerful suggestion that the US has lost, or is at least losing, the ability to self-govern.

I've always assumed that Dykes to Watch Out For was set in Northhampton, or possibly Vermont, but apparently some people think it takes place in the Midwest, and even possibly Minneapolis.

In heavy rotation, to say the least. I assign Hamilton to my Constitutional Law students because its vision of the Constitution myth is more inclusive. Notwithstanding the efforts of any number of judges and law professors the Constitution has evolved, and I believe that it remains a functioning framework.
There are a lot of theories about what constitutes the American Character, but I'm mostly of the view that we are above all a nation of optimists.By some measures we are one of the oldest nations on the globe, but when we are at our best I think we are still a nation characterized by youth, even if we are no longer a young nation. This song gets that, I think. Franklin says:

First of all, Colin Meloy nails it. His Benjamin Franklin comes on like a badass for four lines, but then comes the crusher: "You're welcome from our young nation." The private Franklin becomes more visible as the song progresses, but even the verse about his son is really about his love for the nation he was central in inventing.

And that last word is the most important. When I talk about national identity with lawyers from other places this is a point I try to get out: The US could be better, but it really was the first to try this kind of thing, and it has taken some refining, but we are working on it. When I see how aggressively we can turn on ourselves I question why I am standing in front of a class full of persons of color explaining Article I Section 9:


The migration or importation of such persons as any of the states now existing shall think proper to admit, shall not be prohibited by the Congress prior to the year one thousand eight hundred and eight, but a tax or duty may be imposed on such importation, not exceeding ten dollars for each person.

This year I just threw the slide up and asked, "We all clear on what this was about?" They were.

Even so, I believe in this stuff. God help me, I'm a patriot. I don't think you can be a lawyer and not be a patriot. So this song is reassuring to me.