To Rhiannon Giddens last night at Babeville, possibly the best show I will see this year. If you accept the proposition that African-American music is the beating heart of American music, and that American music is one of our chief contributions to world culture than what to make of Ms Giddens is a difficult case to make without hyperbole. With the Carolina Chocolate Drops she blew life into the traditional string music of the Piedmont, which had looked picked dry. Advancing into the blues, and then into songwriting about the experience of American slavery right now what she seems to be doing is embracing all of African-American music, through jazz, torch songs, and beyond to the point where she is approaching becoming a genre unto herself.

It was particularly affirming to hear this music on a day where it felt like we may be losing America.

When we talk about worst all-time Supreme Court decisions there are several leading candidates. Dred Scott, of course. Lochner holds a weird fascination with a certain type of kook, but most people are confounded by its peculiar logic and the Supremes backed away from it pretty quickly. Korematsu is probably the modern gold standard, and I'll be damned, the Roberts Court just revived it.
Part of what makes all of this this so awful- as if it wasn't awful enough on its face- is that the most part the people coming from the places on the list are trying to escape an unthinkably awful situation which can be fairly said to be as bad as they are due to US policy choices. I also think the inclusion of North Korea is a transparent ploy to make the travel ban look less like a Muslim ban.  Just how many people are coming into the US from PRK? 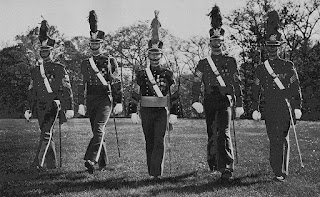 The two part NYTimes article about the Texas man convicted of murdering his wife on the basis of blood splatter evidence is an interesting jumping off point for thinking about the way that law relies on science, and on the breakdown that occurs when science gets pushed too hard. Really what we are talking about are two ways of considering evidence, and the way that the law operates only superficially resembles the approach science takes: a conclusion drawn "to a reasonable degree of scientific certainty" is close enough for jazz, but not really the way that science regards anything. I am sympathetic to Errol Morris' view -- I have to be, if I want to believe in evidence at all-- but "a reasonable degree of scientific certainty" is always going to be an uncomfortable fit with "proof beyond a reasonable doubt". The blood splatter stuff impresses me as pretty shaky science, at least as it is described in the article, but really the psychology of eye witness identification suggests that Redd Foxx may have been on to something: Who you gonna believe, me or your lyin' eyes?

Of course, as a practical matter criminal convictions, or even civil verdicts, don't typically hinge exclusively on scientific proof, and juries are explicitly instructed to take into account the totality of the credible evidence, and interpreted through their personal life experience. My theory of jurisprudence is informed more by Rousseau than by any concept of absolute truth; I am not prepared to be swallowed up by solipsism.

Presidential self-pardon. Consider that Nixon was a solid enough lawyer to have actually practiced after his run for the California governorship failed. (He was probably mostly a rainmaker at Mudge, Rose, but still-- that was a reputable shop back in the day.) Nixon stopped short of pardoning himself. Nixon was a lot of things, but he was probably the last Republican President who was something other than a figurehead for shadowy interests.

The other part of this, the part that really doesn't seem to be said as much as it perhaps should be is that although we think of the Constitution as our foundational legal document it was certainly also intended as an outline which showed the frontiers of how American politics was expected to operated. We are on beyond Zebra now, but norms are still important in answering these questions. The best way to think about something like the limits of Article II Executive powers is probably to ask, Would a judge see it  that way? Put aside the politics of the Supreme Court for a moment-- what would the arguments in the District Court look like? What would you expect to read in the briefs before the DC Circuit Court of Appeals?

Impeachment is a political process that only looks like a criminal trial, and then only if you squint. I don't see this drama ending that way, but if it does I do not think there is a court in the land that would buy into to self-pardon idea. Accepting a pardon is an admission (see, Burdock v. US) and in the face of such an admission the job of the Senate would be to determine if removal constitutes the proper outcome.

“To describe a man’s faith as ‘one of the most despicable pieces of rhetoric that people can use,’ ” [Kennedy] wrote, “is to disparage his religion in at least two distinct ways: by describing it as despicable, and also by characterizing it as merely rhetorical—something insubstantial and even insincere.”

So, okay Justice Kennedy, I suppose I can see a sense in which religious beliefs shouldn't be subjected to criticism from the government, although I'll bet you a nickle that you and I can both come up with examples where we'd agree that free exercise should be limited. Actually, the Colorado Civil Rights Commission came up with a couple that work for me: "Freedom of religion and religion has been used to justify all kinds of discrimination throughout history, whether it be slavery, whether it be the holocaust....". Don't like those? As I recall the use of certain Schedule I drugs for religious purposes is a problem for some Supreme Court Justices, and if I walked into a religious not-for-profit shouting "Death to the infidels," I don't think my assertion of free exercise would get me very far.

Religion perpetuates ignorance and hatred and has done so throughout history, but hey, as long as folks keep it inside and away from me I'll defend their right to believe pretty much anything anyone wants. But please let's not kid ourselves over what religions are really about: they are self-perpetuating belief systems that are actually proud of the fact that they are utterly unsupported by any evidence, intended to assert social control. The front page of yesterday's Buffalo News had a story in which the Bishop of Buffalo asserts that the diocese isn't hiding any evidence of clerical sexual abuse. Now really, who would believe such a thing, given the evidence, if the person saying it wasn't a bishop? In fact, the history of lies about this issue ought to demolish any credibility the speaker has, and when you add to that the fact that the man's entire career has been spent promoting outright fiction as divine truth is really just the cherry on the top. So why do we believe that the sort of discrimination justified in Masterpiece Cakeshop v. Colorado Civil Rights Commission is permissible? The Bible is full of examples of persons claiming exemptions from this or that on the grounds of their piety-- and if I recall correctly things usually go badly for those guys. Religion is no excuse for behavior which would otherwise be unacceptable.