The (old, white) guys who drafted the Constitution were well-aware of the Common Law-- it is what informed the entire document. Since common law principles are necessarily evolutionary in nature, they had to have understood that those principles would inform Constitutional interpretation, and the earliest decisions of the Supreme Court, including Marbury, written by one of the principal authors of the Constitution expressly acknowledged this. The notion that conflicts in interpretation are best resolved by resort to the dictionaries that were contemporaneous with the language in the foundational document or subsequent statutes is the worst sort of outcome deterministic, intellectually dishonest jurisprudence I can think of.
I have no doubt that Gorsuch and Bart's law school essays all started, "Webster's defines..." and take off from there. 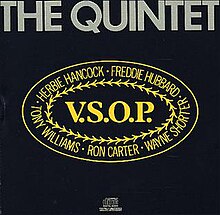 I'm not sure why this set is new to me: I remember seeing the ads for VSOP in Rolling Stone back in the day, and although my deep interest in jazz didn't develop until much later, I just never got around to it. So now I have. For some reason Apple categorizes VSOP as a Herbie Hancock led band I can't say I agree. This is Miles' Davis' Second Great Quintet with Freddy Hubbard in the trumpet chair. There are some incandescent moments here, but those seem to be the moments when things come into focus- there isn't an obvious leader here and as a result there are some slack stretches that I imagine would have sent Miles into a rage. Is it retro? Yeah. By 1977 everyone here had long since moved on into fusion, or electronic jazz of one sort or another, Hancock with Headhunters,  Shorter with Weather Report, Williams with Lifetime, etc.. None of that work was a patch on what Miles had them doing back in 1970, which was the third or fourth of fifth time Miles Davis re-invented jazz, but all of it was worthwhile, and some of it still holds up. This does too, as an artifact.