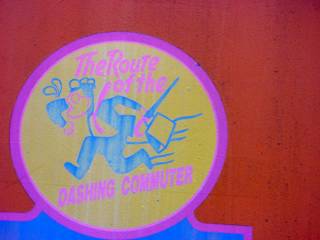 Here's a bit of iconography: Dashing Dan, The Dashing Commuter. I was in Riverhead yesterday waiting to take the train back into the city. On a side track opposite the platform were several old Long Island Railroad cars, including one with this cheerful little image. We used to joke that my father was the model, although I see now that there is not much of a resemblance. I also remember thinking that it was peculiar that the railroad chose to identify itself with harried inconvenience.