When you meet a New Orleanian they always ask, "What did you have for diner last night?", so I guess that's a place to start. By avoiding oysters-- and I can't deny that I was tempted-- I escaped New Orleans without incident. Had a fine crawfish
Etouffée, had a fantastic veal with crabmeat. Had a nice piece of Gulf flounder, done with a white wine and garlic sauce that just danced when I put it in my mouth. I left time on Saturday to go to Mothers, where I had the Ferdie's Special--a po' boy with baked ham, roast beef, debris and gravy, served dressed. Heard some good music, too. Our luncheon speaker was the head of the NOLA Convention and Business Bureau who said, among other things, that nearly 40% of the city's economy is based on tourism. (Americans list the food as the first thing they think of when they think of New Orleans, and Europeans say they they think of the music first.) As the cab pulled away from my hotel it occurred to me that as a destination I can't imagine why anyone would go to Las Vegas when New Orleans is available.

Everybody in town seems just a little twitchy, and everybody in town is glad that you are there. Just as all conversations start the same way, they all seemed to end the same way: "When you get back home, tell everybody that we are open for business." If all you saw was the Quarter, you'd think that all of the images from the hurricane were from a different place, but we took a bus tour and the basis for the perceptible nick in the local joie screams in your face as soon as you are a few blocks away from where you'd normally be. In a way, the parts of NOLA that anyone from out of town sees are like the parts of any city that we visit-- the parts where the people who live there go about their lives are seldom visited. Who in Buffalo would take a guest to the Old First Ward? New Yorkers don't bring visitors to Bensonhurst. Shown here are some houses in the Ninth Ward. I suppose the people who lived here are and were more or less the economic peers of the folks that live in the vicinity of Buffalo's old Central Terminal, or maybe the First Ward. Urban poor, some working, some not, living in houses that have been in the family for generations. 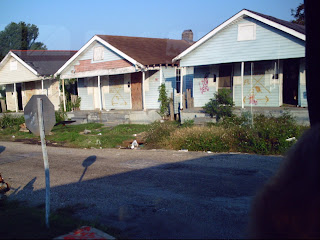 If you look closely, you can see the holes in the roof. You can see the waterline. Block after block of this-- really an area about as big as our East and West Sides combined, I'd estimate. There are big stretches where there is nothing at all-- the houses were just washed away for blocks around. One of those houses belonged to our bus driver's grandparents. Shopping plazas, just abandoned. Over in St. Bernard parish the hospital is gone. Our guide told us that they are finding that there has been a big spike in the sorts of injuries sustained when you are doing repair and construction-- the number of lost fingers has doubled since the storm, for example.

Naturally anything that was in these houses is gone. In a city filled with people who pride themselves on their connection with the place, and with their family histories, photo albums, family bibles, every sort of memorabilia you can imagine was lost. Come to find out that safe deposit boxes aren't waterproof. The contents of safe deposit boxes, when they were finally able to be accessed, had turned into paper-maché.

In every meaningful way, this is a city that was destroyed. The devastation was so far beyond what I had visualized that I can't really convey it even now. People gone, housing stock decimated, transportation infrastructure wiped out. (The local streets are a mess, something you wouldn't realize from watching the news. There is no bedrock, of course, so all the roads that were under water for all that time had their supporting soil, sand and gravel washed away.)

Lots of businesses haven't come back, so, for example, there are a large areas that are not served by any sort of supermarket. There are quite a few big new Home Depot stores, though. Tens of thousands of cars were ruined, or just plain washed away, so there are a surprising number of shiny new cars, and apparently the auto dealers are doing nearly as well as the Home Depot guys.

I almost cried, and then I was angry. This devastation, and its ongoing consequences are not from a storm, except in the metaphorical sense that there was a perfect storm of governmental and private sector negligence, neglect and incompetence. On the federal level it is still happening-- although on the ground the people who live in the city are doing what people have always done. New Orleans is busy. There were people beavering away everywhere, and the hospitality was outstanding. I wish I could go back next week. (I'm thinking particularly about the veal and crab, and Soufflée Potatoes, but also about the things I didn't get, and the places I didn't get to.) If you are thinking of doing a little recreational travel, you absolutely should-- in some ways going to New Orleans has changed from merely being terrifically fun to now being an opportunity to have fun and do something important.