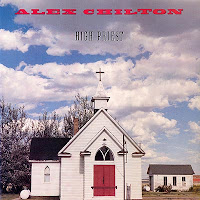 With some artists its when you find your way in. Christgau had been saying for years that Alex Chilton was putting out sides that were worth picking up, but I couldn't find "Like Flies on Sherbet" or "Feudalist Tarts"-- and I didn't know about Big Star. What I ended up with was "High Priest"-- the one where Chilton covers "Volare". Hard to say if it is his quirkiest side-- Bruce Eaton makes the argument that Chilton was misunderstood, and not really quirky. Excentric maybe. Bruce would know. Chilton is an interesting figure in American pop-- the Box Tops material is almost certainly his best known stuff, but his influence-- particularly with Big Star-- is remarkably pervasive. In an odd way Chilton really was a pure artist working in a genre where pure artists are not really acknowledged-- it's called pop, after all, because the goal is to be popular. You have really made it as a pop star when they use your music in car commercials, and even though Chilton wrote a song that became the theme to a sitcom he doesn't seem to have been interested in working towards that goal. As I scanned the obits and the tributes I was struck by how some media outlets understood his significance and others didn't really get it.

| Comments:
Mojo did a profile of Big Star a couple of months ago, and now I guess I know why. I have "Feudalist Tarts", but it's not much of a record, an EP of Chilton doing blues covers and a couple of is own numbers, but "No. 1 Record" is really good.

So's Radio City. I wish I had found it earlier.