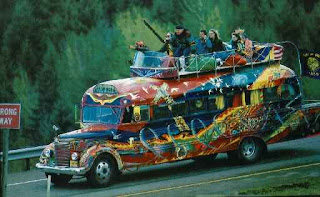 Earlier this year, groping around for something light but engaging to read while I waited in the car for LCA's dance classes to end my hand fell upon Madison Smart Bell's Straight Cut, a thriller that had worked well for me in the past. This time I was mostly looking at the way Bell structured his story: thrillers are tricky to do in the first person because the narrator knows what happened but lards the tale with misleading detail in order to throw the reader off the trail and set up the surprises that move the story forward. Straight Cut is "about" a guy who is hired to make a delivery of a locked Halliburon briefcase. The character in question is a film editor, and the novel is full of cool detail about B-rolls and how to synch film and the like. I thought about it again today when I read this story about the the documentary which has been made about Ken Kesey and the Merry Pranksters cross-country bus trip. Anyone who has read The Electric Kool-Aid Acid Test is bound to be curious about what the footage of that trip must look like, apart from being certain that it was a mess. "'If you had to watch all 40 hours, it would be like something out of 'Clockwork Orange,' ” Mr. Gibney admitted. 'They’d have to prop your eyelids open.' He added: 'Kesey had an innate distrust of experts: stay away from the experts. In this case that meant stay away from a cameraman. Imagine how great it would have been if they had a real cameraman. But instead you get all the bonehead mistakes of the amateur. There are no establishing shots, the camera is always jiggling, and none of them had a particularly good eye.'" Indeed. One of the things I have learned from a lifetime of watching movies, and a much shorter span of studying and teaching them, is just how demanding the craft of it all really is. "Magic Trip: Ken Kesey’s Search for a Kool Place" sounds like something very much worth seeing, for both the craft and for what it documents. It has long seemed to me that we understand the 60's poorly.