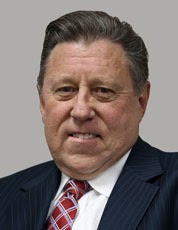 "non-traditional" students. I have the sense that lately law school has become something that people do when their Master's degrees lead them down cul-de-sacs, but that was rare at the time, and that isn't just what I mean: we had a pretty sizable population of people who'd left careers and jobs, and one couple who were tenured faculty at UB who thought law school would be a fun thing to do for their Sabbatical year. We were just past the time when people stayed in school more or less to beat the draft, so we had some of those hold-overs. We had, in other words, a class full of people who were older than was typical, and one of those students was Ed Flint.Ed had kicked around some-- he was proud of having been a cab driver-- and had gotten his BA, from Queens College-- more or less going part time-- in his mid 30's. He was, I think, the first classmate I met. I recall that he was playing shortstop at the law school orientation picnic, and made a great play on a little Texas Leaguer I'd smacked, and I recall also that at some point during that afternoon we talked about how with our law degrees anything might be possible. That was typical of him-- he was a hard worker, and an optimist, and he was also an amiable guy who enjoyed a blue sky conversation. The world really was opening up it's possibilities for him. He was Editor in Chief of the law review, and went on to practice for a time in BigLaw. He moved around a bit, and ended up practicing with Silverman Acampora. He and his wife, Joyce, lived about two blocks from my boyhood home. A couple of years ago we learned that he'd been diagnosed with ALS. He came to our reunion last summer, in a wheelchair. He never missed a reunion. He was in good spirits, and was facing the inevitable with strength and his characteristic optimism. As far as I have been able to learn he was practicing right up to the end, which would surprise no-one who knew him. I don't think anything was ever easy for him, but I cannot recall ever hearing him complain, about anything.