How to be a Successful Evil Overlord:

# 98. If an attractive young couple enters my realm, I will carefully monitor their activities. If I find they are happy and affectionate, I will ignore them. However, if circumstances have forced them together against their will and they spend all their time bickering and criticizing each other except during the intermittent occasions when they are saving each other' lives at which point there are hints of sexual tension, I will immediately order their execution. (Via Kottke.)

To the Bike Path Sunday, for a calibrated four-miler. I was there around lunchtime, and was therefore in the middle of an event I did not know about, the BPAC Six Hour Distance Classic. As I advance deeper into my 50s I find that I still have some athletic goals, but six hours around a 3.25 loop ain't on the list.


Onwards from akqa on Vimeo. This charming video captures the reason I went to the Ridge today. For an hour I was able to get outside my head, a much-needed retreat.

At some point I am going to record the events of the past two weeks; I think some chronology is important in order to put the realization that has been dawning on me the past few days into some sort of context. For now, a couple of points, and an update. Lymph node biopsy, CAT scan, bone scan and MRI all indicate that there has been no spread. EGA will be meeting with her Bloomington medical oncologist Tuesday; she will start on her 15 week long chemo regimen shortly thereafter. All of that is positive, but what is dawning on me is that this entire process is about uncertainty. When she called on Good Friday to tell us that they suspected she had breast cancer we didn't know anything. When she went in for the biopsy on Monday, we spent the rest of the day not knowing anything. When we learned the results of the biopsy, we knew what the results were, and we felt like we were filling in details. That was an illusion: we really only know whatever it is that we think we know to within a degree of statistical probability, something that we have already established is nearly completely unreliable. So for the short term what we will know is when Emily will start chemo. At some point we will know what her Bloomington oncologist's impression is about the efficacy of the particular treatment; and before that we will know just how sick and miserable the chemo makes Emily. In 15 weeks we'll know what the docs think the chemo has accomplished, and shortly after that we will hear her surgeon tell us that the procedure went well, but we still won't know anything. We are now permanently wondering about Schrödinger's Cat, minute to minute, day to day. I thought I was a good existentialist. I thought I had adjusted myself to beams falling; it turns out I hadn't figuired on any beams falling on someone I love.

I'm not sure how to write about this, but I know I will be writing about it more. Last week EGA, who is 23, was diagnosed with breast cancer. She is treating, and in good spirits, and since we got the bad news all of the news we've had so far is encouraging. She is chronicling her experience at Cancer, The Musical.

EGA getting it done at the Bloomington Mini Marathon. 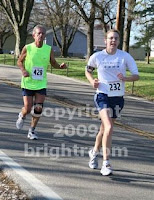 Margaret Whiting isn't exactly the sort of singer I like, but she's an interesting figure in the history of American popular music. She used to show up on Jonathan Schwartz' WNEW program, where she'd sing a little, and talk about her father, the composer Richard Whiting. I've seen her perform, and she is said to have been a favorite of Johnny Mercer's. So there I was, reading the obit of Marvin Webster, "The Human Eraser". Underneath is the obit of a porn star, Jack Wrangler, survived by his wife, Margaret Whiting. Lisa Minelli, here's your hat. Margaret Whiting has you beat hollow.

25 great albums that work best when listened to from start to finish. (Via Kottke.) I am not familiar with a number of these, and of the ones I know, many are not sides that I am inclined to play at all. Pink Floyd give me a pain. Nobody wants to hear "Nebraska" except for "Atlantic City", I don't care how much of a masterpiece it is technically.

I agree on Neutral Milk Hotel, "In The Aeroplane Over The Sea", and although I kind of agree on Quadrophenia, isn't that a lot of The Who to take at one sitting? At least in the old days you had to get off your butt to turn the record over. If there is a double album that deserves to be on this list (apart from "Zen Arcade") it is probably "Exile on Main Street". Or "Blonde on Blonde".

Congratulations to EGA, 1:48:14 in the Bloomington Mini Marathon, 08:15 pace, and a snazzy 11th place in her age group. She knocked six minutes off her PR over a tough looking course:

To The Hold Steady at the Tralf last night, sold out to the walls for a band that completely lived up to its reputation as a terrific live act. They have a deep catalog, and they work hard to put each song over-- they weren't just playing, they were performing. I was put in mind of Graham Parker and the Rumor, if they'd had a copy of "London Calling" on their bus.

You know what I hate? When people say "arbitration" when they mean "mediation". I also hate it when people say, "sworn affidavit". What the hell is an unsworn affidavit? These are not things laypeople say, for the most part. Laypeople seldom talk about affidavits or alternative dispute resolution. These are things that people in our glamor profession say, all the time. I hate that.

Here's an exciting new amendment to the Uniform Civil Rules for the Supreme and County Courts:

(c) The matters to be considered at the preliminary conference shall include:

[(6)](7) any other matters that the court may deem relevant.

What this means is that counsel are now in a position to get in a lot more trouble at a preliminary conference.