A and the rest went peach-picking, and the thought was that peaches would be nice with ribs, so I rubbed a rack down with Cajun spice and put it in the smoker. I melted some peach jam in a little white wine, and added the blueberry compote I had left over from breakfast, then I chopped a jalapeno and threw that in to bring some heat. When the ribs were done in the smoker I brushed the glaze on them (I smoked a salmon fillet for LCA-- the glaze worked nicely on that, too.)

When the peaches arrived they were mostly hard, but I put the nicest ones on the grill after peeling and halving them. I hit them with some spray vegetable oil, and sprinkled them with salt, and they worked out well. I sliced the grilled peaches, and made a relish with chopped tomato, red onion and another jalapeno, and it came together pretty nicely.

Just finished Victor Bockris' Keith Richards: The Biography
which is, I suppose, as good as Keef scholarship is likely to get for a while. It's a good read, best, I think, on Richards' early life and the very early days of the Stones; weakest towards the end. It would be a better book if it were more about one thing or the other-- more about the music, more about the drugs, or more about the scene. Oddly enough, the impression I get from Bockris' book is that The Human Riff is a quiet, shy guy-- kind of sweet, actually. He loves his family, and the drugs seem to be a coping mechanism for him that got out of control.

I'm sad about Ted Kennedy, who was probably no more flawed than most people, although his flaws were more visible. Giving every possible benefit of the doubt Senator Kennedy's death leaves us with eleven senators that are worth a damn, and I'm not seeing a towering leader among any of them.

UPDATE: Via Lawyers, Guns and Money, Erik Loomis has a list of the six greatest senators in US history. It isn't a hard list to guess, which says something about the institution.

It occurs to me that one of Kennedy's legacies will be something people off the Hill won't really be able to see. It is pretty generally acknowledged that he had the best staff in Congress. (When I worked for Birch Bayh we thought we were in the same league, 1A and 1B, if you will.) That staff scatters now. Some will be picked up by the next senator from Massachusetts, but for the most part they will probably take their expertise to other Democrats on the same committees. In that way a great deal of the good work that Kennedy has done over the years will continue.

When TCA was in town she heard a bit of Bob Dylan's radio program as we were driving around. "Where's he from?" she asked, and when I told her Hibbing, Minnesota, she said, "Then why does he talk like that?" It wasn't really a question: TCA was saying that Dylan's distinctive twang is an affectation-- as phony as the stories he tells about running off with the rodeo when he was 12. Of course, Dylan as unreliable narrator is part of the point of Dylan, and even if he didn't sound like that when he went to high school, he's talked with that nasally drawl for so long at this point that its authenticity is no longer an issue. Come to find out, though, that Dylan's accent may be more authentic than anyone supposed. 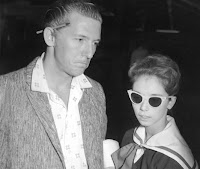 Top Ten Worst Rock'n'Roll Career Moves. A little too Brit centered (or 'centred') but who could resist this photograph of the Killer and his bride?

The main reason to go to Keggers of Yore is to see if there are any pictures of you there. I couldn't find any, but I'm pretty sure I've been to some of those parties.

A moment of silence for Les Paul, a great musician, and inventor of technologies that made modern music possible.

I have pretty much worked out the list of what we will be watching in my Lawyers in Movies class this semester. Thanks to everyone who made suggestions; chances are you will recognize your contributions. Subject to last minute fine-tuning, by year of release:

Three movies from this century, three from the sixties. Two from the seventies-- a peak moment in American film, although you wouldn't necessarily know that from the lawyer movies of the period. One 80's movie, and three from the 90's. I managed to cover every decade from the 30's to date due to serendipitously coming across Counselor At Law. There's a funny story about Counselor At Law, but it's not my story, so if TCA wants to tell it, that's what the comments section is for.

Who can identify the only director who has two movies on the list? Anybody care to opine as to which movie has the most accurate depiction of a trial?

I was worried that criminal law would dominate, but it hasn’t, really. If you will allow me the notion that Inherit the Wind and To Kill A Mockingbird are really about civil rights and intellectual freedom respectively, then only four are criminal law movies. (And if you reject that notion, well, that’s still only six criminal law movies—still less than half.) We’ve got environmental law, and matrimonial law and a strong showing from the tort bar. There’s a competency hearing.

What didn’t make the cut? "Philadelphia" (1993) would be a worthy inclusion. I was overloaded with 90's movies, and I am not sure if it holds up. What works in "Philadelphia" is mostly the acting. We've reached the point where the students in the class are likely to find the social point that the movie makes pretty obvious. "Legal Eagles" (1986) is movie I was prepared to dislike, but I think there is actually a good movie in there trying to get out. It has pacing problems, but it is thematically well composed in a way that is subtle and surprisingly sophisticated for a movie with so many explosions. I nearly included "Chicago" (2002), to have a musical in the mix. I didn’t because I wanted to avoid over-balancing the criminal law in the mix, but it’s certainly a movie that might get shuffled in some time down the road.

Budd Schulberg's dead. I'd have guessed that he died years ago. He is a figure from another time, but "What Makes Sammy Run?" has still got to be on anyone's list of great Hollywood novels, and "On the Waterfront" (A's personal favorite movie) is one of those rare movies where the acting, the writing and the direction are all so sublime that the thing can be re-watched for years and still yield new nuances. I recall "The Disenchanted", about going to the Dartmouth Winter Carnival with F. Scott Fitzgerald to work on a screenplay, as being pretty good too. I wonder if it is still in print?

Yes' desecration of Paul Simon's "America" came on the radio, and LCA was appalled. I told her Jon Anderson had it in mind to fix the song by adding loads more cow bell, and then she understood.