Is The Promised Land Chuck Berry's greatest song? It's my favorite anyway.


" Now, some people might suspect the motive of a songwriter who could write such a paean to place when the place in question subjected him to constant racial harassment. But Berry never concealed his motive – to make as much money as possible. How American is that? That a man who had every reason to begrudge his country could write “The Promised Land” or the even more besotted “Living in the USA” (“Looking hard for a drive-in, searching for a corner café . . . / Yeah, and the juke box jumping with records like in the USA”) is, for me, cause for the profoundest patriotism. Furthermore, unlike “This Land Is Your Land,” Woody Guthrie’s national anthem of Depression-era populism, “The Promised Land” doesn’t ask that you hate the rich or share the singer’s sectarian politics. (Listen to the rarely sung verses four and five if you don’t believe me.) I do hate the rich, but that’s because I’m not as generous of spirit as Chuck Berry is. All that “The Promised Land” and “Living in the USA” ask of you is that you love American place names, not be a complete stiff, and maybe appreciate a “rare hamburger sizzling on an open grill night and day.'"

In an odd way it seems to me that The Promised land and Back in the USA may be Chuck's most personal songs, and I think it is probably worth noting that  Irving Berlin never wrote a more appealing song about what makes it good to be an American. I don't think anybody ever did, and Chuck Berry wrote two, and made it look easy. 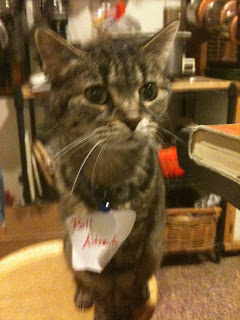 I cannot improve upon what Caroline has said about Lancaster. The sense of loss we feel when a pet dies is a fair measure of the happiness the pet brought us in life, and Lang delivered every day. She was a promise kept among us all.

It seems to me that the right thing for Penn State to have done would have been to have said, "These horrors occurred because the importance of football was out of proportion to our university's mission. Henceforth we will be a D-III school, and focus on academic excellence." "Responsibility" has turned into a code word, and I don't want to fall into that trap, but wouldn't taking responsibility for this mess have to include taking the initiative on reforming the campus culture rather than just taking the lumps the NCAA dishes out? I can think of a lot of schools where the sports culture has so consumed the educational mission that a similar scandal could happen, but oddly enough none of them are D-III schools. Penn State is an important academic institution, and it should act like one. Instead it is acting (still!) like a sports institution. If the supreme authority over Penn State is the NCAA then Penn State still lacks institutional control.

See, this is why satire is so hard. I make a joke about Batman and Mitt Romney and not 24 hours goes by and it is a real thing. It's not that I'm so prescient, it's that the world is so crazy. I can't compete with crazy. 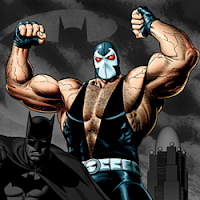 It's just a coincidence, of course, but I really love it that Romney's business has the same name as a Batman bad guy. What, Advanced Idea Mechanics was taken? Do you think they considered THRUSH?

To Richard III at Shakespeare in Delaware Park last night. I suppose some actors yearn to play Hamlet, and some hope to grow into Lear, but Tim Newell makes a proper Duke of Gloucester, and I imagine he's been waiting for the day that he got a turn at it for some time now. Richard is really an extended character part, and Newell  does it up right.  Saul Elkin's direction helps him a good bit along the way while making some interesting and challenging choices. We notice right off that this is going to be a somewhat different Richard by the delivery of the "Now is the winter of our discontent" speech. It is such a great opener that few can resist really chewing it up, but Newell and Elkin let it build slowly, so that the first few lines are nearly conversational. Shakespeare had in Richard the same problem that Milton had in Satan, of course-- the best character is the villain. Both Shakespeare and Milton try, I think, to compensate for this by giving everyone else a lot to say about what a bad guy the villain is, and the result, in Richard III at least, is that the play is surprisingly bulky-- it is the second longest of Shakespeare's works. In most of the productions I've seen the director just throws up his hands at this, and starts making cuts. The effect of the cuts is usually to make Richard even more sympathetic-- or at least more fascinating. Elkin has gone the other way. He leaves in more than I've ever seen in a production of this play, and if Richard remains compelling, well, after all, he was a pretty persuasive guy when it comes right down to it. By leaving in, for example, Margaret, (well done by Lisa Vitrano) we get a lot more context, and a much better sense of what a nest of vipers the English court was. (Margaret is also a great character. She is easy enough to cut out, but she *gets* it.)

I am always surprised at the exodus which occurs after the intermission at SiDP, but it would be a mistake to miss the second half of this production, which may be the best direction I've seen from Elkin. He emphasizes the psychological dimension of the character here, and uses lighting and sound to bring out the real drama in the play, rather than employing a lot of stagey swordfights and battle scenes. (There is a decent sword fight if you go in for that sort of thing.)

Standing around at the Boilermaker someone asked me if the Keith Richards Athletic Club is for real. I'm not sure what "for real" means, but I told the guy that the KRAC colors have appeared in marathons in four states, and on two continents. We've been in races in three countries, and a little research reveals that KRAC affiliated athletes have run in at least six of the largest road races in the world. So yeah, I guess we're for real.

Greens Morelli and Hats with the meat sauce for dinner. 13,000 starters. Seriously, every year I think it can't get more crowded, and every year it somehow manages to. Hot. This is the first  time I can recall feeling nauseous for the first mile, but I pretty much pulled it together after that. Saw a deer running on the golf course at around Mile 3. The top of the golf course hill is one of the best things I see every summer, and the downhill after that is as good a feeling as I know. The Utica Zoo made a good showing, but I wish they'd get another llama. Orange popsicle this year. Rounding the corner for the last mile, a band with, I'd guess, over a dozen drum kits, banging away-- big motivator, but I wonder where they rehearsed? Full pipe band at Hanna Park, right when I needed them.

Every year it's my favorite part of the summer.

Ah, is this not happiness? 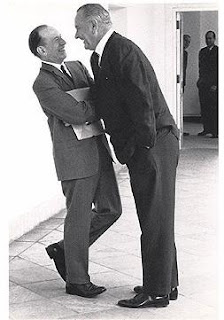 I wanted a big read for the summer, so I picked up a copy of Robert Caro's Master of the Senate. My plan may be thwarted, because the damn thing is so compulsively readable I might just bomb right through it. The damn thing very nearly tells its story in real time, but that turns out to be one of its charms. Johnson is, of course, a complicated character-- the first two volumes of the series established that, as well as establishing Caro's dislike for his subject. He still finds Johnson disagreeable, but seems to be coming around. When it is all said and done what this shelf of books may ultimately be about is America's Original Sin. Johnson was a profoundly flawed man, but his role in advancing civil rights cannot be disputed, and the case can certainly be made that he was the only person who could have accomplished what he did.

The other vibe I'm picking up from the book is the overall uselessness of the United States Senate. When Congress was the dominant force in American governance it served a role-- weak executives are what I usually think of when I think about the underlying causes of  the Civil War, but, of course, it was more complicated than that. The Senate managed to hold things together for a while, maybe long enough for the nation to endure the Civil War, rather than merely splintering. Would that have been an altogether bad thing? Well, it sure as hell would have been bad for slaves, so I suppose that's justification enough today. The whole notion of State's Rights, and the necessity of state representation in Congress has caused a great deal of mischief, and I think the time has come to start rethinking it.