I am continuing to enjoy my Constitutional Law immersion, which, like most enjoyable learning experiences is causing me to think about things in a fresh way. This is somewhat surprising-- all lawyers take Con Law, and the overwhelming majority undoubtedly take the full sequence. At my law school that was, more or less, a course on governmental powers, a course on civil rights and civil liberties, a course on criminal procedure and a course on federal courts. I took some other stuff too-- like many law students it seemed to me that it would be important to know all that stuff. Even if it wasn't it was still interesting, and I am glad I did it. When I was asked to take the assignment I started in my re-reading The Federalist Papers, because I thought that would be an interesting way in. It hasn't contributed to what I'm talking about every Wednesday night, but it has informed my approach somewhat. The other text that I thought would be useful was my law school copy of Lawrence Tribe's American Constitutional Law. This has been a real eye-opener. Copyright 1978, but even so I reckoned that on the core basics it would get me through. Instead what I have found is that the nearly 40 years that have passed have been amazingly transformational in constitutional jurisprudence. Back in 1978 the United States was experiencing what seems to me to have been the peak of Presidential power, and we have been moving away from that peak since Nixon got on the helicopter. 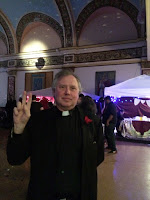 It was one of those weekends that was so crammed with fun that I'm nearly crippled from it. The big event was Saturday's:ELAB's Cirque de la Lune: Film Noir. This year ELAB added an interactive mystery to the mix, and I was cast, somewhat against type, as one of the suspects, The Rev. Aldous Taylor. When I consider the scam potential of the six buck collar I'm sorry I didn't buy one sooner.

Then up Sunday, bright and early, to judge a couple of rounds of mock trial at Buffalo State, including a very good team from Geneseo. A weekend like that is, I think, better than a weekend with just one fun thing-- and certainly better than a weekend in the office-- but I'm just as glad they are no more frequent than they are.

Jared, Chris and I pick the Oscars

How well did you know Scalia at law school?
Not well. It was an interesting class. Scalia, myself, Paul Sarbanes, Bill Ruckelshaus. But in those days, Isaac, we had a class of 475 that was divided in thirds. So you got to know your section very well. But I didn’t know who Scalia was until the last semester of my last year, when I took a class called Federal Courts and the Federal System, with a great man named Henry Hart. It is 1960. We are in the middle of the civil rights revolution. And there’s this guy in class who begins engaging Professor Hart every day in these long dialogues over whether it was appropriate for federal judges to reach in and take cases away from Southern criminal courts, in cases where, as everyone knew, if you were a black defendant, forget it. And this went on for about three weeks. [Laughs.] I finally turned to the guy next to me and said, “Who the hell is that guy?” He said, “That’s Scalia, he’s on the law review.” And I said, “Does he know what it’s like to be black in the South?” A bright guy—yeah. But he was to the right of Marie Antoinette for Christ’s sake. There was no consistency in his so-called philosophy. Money is corporate speech. This is all preposterous.

What I really love about this anecdote is how closely it resembles my law school experience. We had three sections, and although there was crossover, for the most part the people you started with were the ones you were closest to. At some point you would take a class with people you'd never met, and it was often a matter of, "Who the hell is that?" And, of course, there is the matter of who we become after. Some people become what you would expect, and some become these strange outliers.

I'd gone into the co-op to buy a baguette, and when I got back in the car A. said, "Scalia died." "Good," I said, and I laughed. Few have done as much harm to American jurisprudence as Antonin Scalia, who claimed that he was an "originalist" or a "textualist". Neither theory of constitutional law is consistent with the common law tradition the constitution emerged from, or the history of constitutional law from at least Marbury on. What his theories allowed him to do was to engage in a type of outcome determinative decision-making that suited his political ideology. Since, under our system, we are mostly stuck with his decisions we find that we are living in a post-Scalia world. Tramp the dirt down.

It's funny the things that stick with you. Years and years ago there was a comic strip called Moon Mullins.  I couldn't tell you much about it: the titular character was a former boxer, but that doesn't enter into the strip I'm recalling. One of the characters was feeding ducks on a pond, and when asked why replied, "Cast your bread upon the waters and it shall be returned to you a hundred-fold". That sounds like the set-up to a Peanuts strip, but what happened next wasn't: the first guy spotted a panhandler, and mindful of the mis-quotation from Ecclesiastes pulled a ten dollar bill from his wallet and gave it to him. Immediately he was swarmed by mendicants looking for handouts.

So it is with good deeds. This morning at 6:00 AM my phone rang. The caller's brother had been popped for inter alia, possession of child pornography, and my involvement with the Lawrence Brose Legal Defense Fund means that a Google search will turn up my name. I feel bad for the caller, and referred her to some actual criminal defense lawyers, but am left with the question, "How come nobody ever calls me at the crack of dawn asking for advice about pizza?"

I don't recall what year I ran the 5th Avenue Mile, but I remember that it was a beautiful fall day, and I remember that the race was rescued by Donald Trump. The concept of a straightaway mile race on a city street was pretty new. Milers are track athletes and seemingly small things like roadway grades, make a big difference to them. The race, which was run in heats with the elite runners going last, was a chance for regular runners to be on the same pavement with world class runners and to see those runners as they blazed past, after we'd had our go. It was pretty special for that reason alone, but it was also a cool course, down the Museum Mile. It had lost its sponsor, and Trump, sensing an opportunity for self-aggrandizement, stepped in. He was there, all orange, with that weird hair, and you know what? Sponsoring that race was a good thing that he did. I had a great day, and I've always had a tiny sliver of gratitude towards him for that.

Now he is burning down the Republican Party, so that's two things I like about him. It is hilarious to watch, e.g. David Brooks lose his mind as his party descends into madness, yes, and Charles Krauthammer too. It will be even funnier watching them wring their hands if Trump gets the nomination, because cats like Brooks and George Will and Kruthammer are how Donald Trump happened. When Ronald Reagan went to Philadelphia, Mississippi for his first post-convention speech, when Bush pere ran the Willie Horton ads-- and on down the years, the conservative punditry was stitching together the monster that is now running amok.  The only thing that could possibly be better than this would be watching these characters trying to walk back their horror at this thing they have created in order to explain that Trump isn't so bad.

The sportswriters at the Buffalo News often seem to have an adversarial relationship with the Buffalo Bills, and this is, I think, unfortunate. The relationship WNY has with this team is deep and wide: when the Bills win, everybody's Monday is a little brighter; and when they lose it's always like a rainy day. Because of the way they are reported the middle of the week and the off season frequently feels defensive and flinchy, and since it's just a game that seems wrong to me. This came to mind when I was in Miami last fall, reading the coverage of the Dolphins in the Herald. The Dolphins at that point were more or less tied in the standings with the Bills, and were a pretty terrible team, but the columns and the reportage had a ring of optimism to it. The News, on the other hand, has probably run a fair number of capable football people out of town, and one of those people was Wade Phillips. It was nice to see ol' Wade, a Buffalo kind of guy if there ever was one, get the props he deserved last night: that Denver defense was as good as it gets.

Five Thirty Eight reports that "Trump won 39 percent of the vote among Iowans who decided on their candidate more than a month ago. But he took just 13 percent of voters who had decided in the last few days, with Rubio instead winning the plurality of those voters."

One could read that as meaning that Trump peaked too early. I think it means that the narrative shifted on him, and that Iowa caucus-goers were hedging. I did not know that there is a difference in procedure between the Republican Party and the Democrats: it turns out that the Republicans vote in secret, while the Democrats huddle and are counted in groups. I suspect that this has an impact on outcomes.

You don't hear enough about Jessie Jackson these days, but as Pierce points out Jessie was as close as it gets to winning twice.

The Glory That Was Grease. Oddly enough, I was thinking about the invention of the Fifties the other day, specifically in the context of how the term "Punk Rock" came into being. Before the Ramones, before the Stooges, before the New York Dolls or the Velvet Underground a punk was a young sexual subordinate in a homosexual relationship. (Wilmer, in The Maltese Falcon is referred to as a punk, and takes considerable umbrage at the designation.) A punk has the veneer of toughness, but is only really tough because he enjoys the protection of his patron. An actual tough guy would have been called a "hood". And where did the idea that rock musicians were tough guys come from? Musicians aren't hanging out on street corners looking for trouble: they have piano lessons to get to. Blues musicians are a different story: a blues man will mess you up....