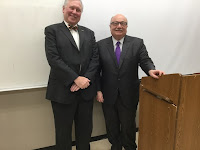 This Saturday is the final event in the Buffalo State Trump's First 100 Days program. For my piece of it I ended up inviting the Hon. Lawrence Vilardo, of the Federal District Court for the Western District of New York to address the class on his experience with the judicial appointment process. It was exceedingly generous of him to do this, and the evening was far more interesting than it would have been had I spoken about Neil Gorsuch. As it happens, the appointment of Justice Gorsuch, whose first official act was to approve the execution of some poor bastard in Arkansas, is the sole thing that President Trump has accomplished to date. I wonder how many Republicans are able to concede this?

Oh Buffalo, everyone is connected to everyone else. The recently deceased Federal District Court Judge John Curtin was the model of what a judge should be: patient, knowledgeable, and fair. It was always a glad moment when you filed a new case and his name came up on the wheel-- for all concerned. It would be difficult to come up with the name of someone who did as much good in our community. Come to find out that before he was US Attorney, and well before he took the bench he served as confidential law clerk for New York State Supreme Court Justice William Lawless, the father of A's trial partner when she was at the Brooklyn District Attorney's office. Why, that's almost family!

Seriously? Our Lady of the Magic Dolphins won a Pulitzer?

I respect Bob Dylan's excursion into the Great American Songbook, and even derive a mild pleasure from both Shadows in the Night and Fallen Angels but although I know I am going to buy a copy of Triplicate I can't say that I am rushing out to do so. Ol' Bob's affection for these songs is genuine, and I love them too. Anyone who has listened to Theme Time Radio understands that Dylan's roots in this music are as deep as his roots in American culture generally, which is why, truth to tell, Dylan himself-- a self-creation if there ever was one-- is a profoundly important contributor to that culture. Three albums worth of it might seem like a lot, but it must have seemed important to him to explore this territory thoroughly, and who am I to dismiss this effort. I guess the best way in for me will be to listen to the first two albums in the cycle, then delve back into the canon.

It was a while back, but one of the coolest Buffalo music things I've seen was the time Barry Harris came to the Art of Jazz, and asked for a volunteer from the audience to take over the piano bench while he sang a song. After a little prodding from her date a woman went up and absolutely crushed it. I mean, she laid it down, and everyone in the room-- including Mr. Harris-- was like, Where'd she come from? Come to find out she was Lisa Hasselback, known to the local cognoscenti. She is married to a trombone player, John Hasselback, Jr., and they both studied with Jackie McLean. Saw them both, together with the rest of the Blue Note Eight at the Pausa Art House Saturday a pretty terrific evening of music.