I haven't seen a decent analysis of how the Trump campaign worked until a friend sent me this piece from Forbes. White person alienation and entitlement are the factors that I've read columnists opine about, but how did the campaign harness those forces?

"I helped facilitate a lot of relationships that wouldn't have happened otherwise," Kushner says, adding that people felt safe speaking with him, without risk of leaks. "People were being told in Washington that if they did any work for the Trump campaign, they would never be able to work in Republican politics again. I hired a great tax-policy expert who joined under two conditions: We couldn't tell anybody he worked for the campaign, and he was going to charge us double."

Come to find out, at least by this account, that Jared Kushner devised a social media strategy using micro-targeted Facebook placements and the like. This seems to have gone undetected by most commentators-- personally, I thought the Clinton campaign's media strategy, which included early airtime purchases which looked like they were locking Trump out of a lot of markets, was the foot on the throat of the Trump operation.


"Jared understood the online world in a way the traditional media folks didn't. He managed to assemble a presidential campaign on a shoestring using new technology and won. That's a big deal," says Schmidt, the Google billionaire. "Remember all those articles about how they had no money, no people, organizational structure? Well, they won, and Jared ran it."

I think (I hope) that a lot of people have known that Trump is a mountebank for a long time. I'm thinking that we are rounding into the place where the intelligent among his supporters should admit that their support for him was really just coming out of a fervent dislike of social progress, rather than outright bullying, and now would probably be a good time to fess up to merely trolling. You can go back to being cranky Republicans when you admit that you let your contempt rule your rationality.

Of course, this will probably never happen. Even today there are people who will admit that Nixon was a crook with only the greatest reluctance. 100% of Trump supporters support Trump, and none that I've met are willing to admit that they should have known better. No-one wants to be made to appear foolish, and the capacity for admitting a mistake is a rare quality. I feel confident in predicting that the Republican Congress will not evolve into this capacity until every (white) man jack of them are convinced that he is of no use in advancing their agenda. Since he has demonstrated this already you'd think they'd  be working on this, but one of the realities of 21st Century Republicanism is that they tend to the stupid. And hateful. Indeed, one of the things I realized last week (about which more anon)  is that the rise of Trumpism is really a reflection of contempt for the norms that underlie our most basic social conventions. You will find pundits who will tell you that the Republican base is comprised of persons who have been economically disrupted, and perhaps that is true for some of  them, but for the most part these people are engaging in uninformed scapegoating. Make no mistake-- the Constitution was intentionally designed to give power to persons and economies that were cruel and exploitative and well past their historical utility, and now we are seeing how that echo reverberates.

Per Five Thirty Eight, the four types of Constitutional Crises: 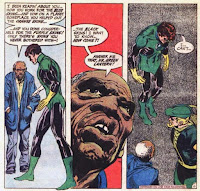