I've been saying it for a long time: there's no such thing as centrism.

There are a lot of writers who'd be great on the subject of President Trump. Mencken. Balzac. Murry Kempton. Jimmy Breslin wrote about him pretty regularly, and here is a nice sampler. Every paragraph-- every sentence-- sings.

Trump, in the crinkling of an eye, senses better than anyone the insecurity of people, that nobody knows whether anything is good or bad until they are told, and he is quite willing to tell them immediately. His instinct appears to tell him that people crumble quickly at the first show of bravado, particularly members of the media, which is the plural of mediocre. Trump cannot be blamed for taking advantage of people who love to be victims of press agentry. He will tell the shoe-shine boys of the press that he plans to have his Eastern Airlines shuttle fly into space, and they will treat it as exciting news. As far as getting publicity whenever he wants it, Trump is the white Al Sharpton.

One of the saddest phrases in English is "some assembly required". That's why the gloomy Swedes spell it "En viss montering krävs"

Harvard is moving to ban frats and sororities. Good. My undergraduate college did not allow national Greek organizations, but there were local frats and sororities. For the most part these were off-campus housing options with different sorts of partying preferences. I was gently recruited to one my junior year because, mostly, it got around that I had a bank of pretty good research papers that they wanted to use as a foundation for their own fledgling term paper bank. I politely declined, but would occasionally socialize with them. I wasn't much of a joiner, I guess, and I was uncomfortable with losing control of my intellectual property. I still have the work, and will donate it to Geneseo upon my demise. Sorry, Geneseo. I know you'd rather have money. 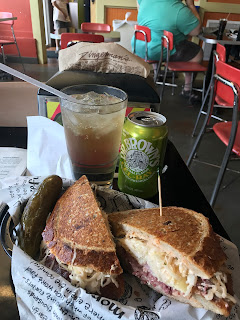 I've been wanting to go to Zingerman's Deli for years, and fate finally sent me a deposition in Ann Arbor. Classic delicatessen is rare anywhere, and Zingerman's is said to be one of the best in the country. All the way across Ontario (and actually for a day or two before) I pondered what I would order, finally settling on a Reuben. In fact, this Reuben, pictured on the right.

It was pretty good. I think part of what gets people worked up about Zingerman's is the bread, which is certainly better than the bread one typically finds in a lot of sandwich joints, but for me the bread was an issue. Grilled, as a proper Reuben must be, the flavor profile of the bread overwhelmed the other ingredients. Good corned beef, but machine sliced. Sauerkraut was mild, as was the cheese. The Russian dressing added umami, but could have been more piquant. No beer (!?!) but you can't go wrong with a Cel-Ray soda. The next day, after my EBT, I went back and got a corned beef and pastrami combo to go. I was concerned that the sons-of-bitches at the Peace Bridge might confiscate my sandwich, so I drove back through Ohio to keep it out of the hands of the US Government. It arrived at Big Pink none the worse for the journey (along with a terrific coffee cake and some other things). That's what I'll order next time.

On the whole Zingerman's lived up to its reputation, I'd say. I didn't really see anything there that I couldn't get a Premier, or Gurcios-- except for the corned beef and pastrami, and I'd put the corned beef sandwich at Risa's right there with the pride of Ann Arbor.

I think for my next sandwich research project I will try Phillipe the Original for a French Dip, or maybe Ben's Chili Bowl, for a half-smoke

Good thought for Independence Day weekend from Archibald MacLeish: "Democracy is never a thing done. Democracy is always something that a nation must be doing."