To Joe Lovano with Trio Tapestry at Bruce Eaton's Hunt Real Estate Art of Jazz at the Albright-Knox yesterday, as fine an afternoon of jazz as you'll find, and the opening gig for this group. As Bruce put it in his introduction, for an hour or so we were at the center of the jazz universe.

The secret weapon in this group is pianist Marilyn Crispel. Listening to this music you could hear why Lovano wants to play with her- she is a terrific complement to his somewhat angular lines,  and seems to breath along with him.

So long Orng. You were a good cat. 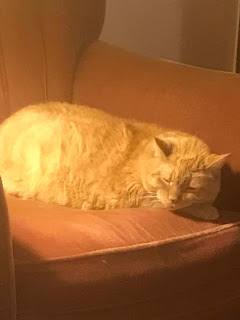 There is talk that the Republican Party may not hold primaries for the 2020 race, and after all, why should they? I cannot think of a potential Republican candidate that would make the run, and even if there was one, what would that person* run on? Mittens got slapped down pretty hard for suggesting that Trump is uncouth, so  that won't work. In years past there were Republicans that said they wanted to make the party more inclusive, but that's a laugh- the racism is so baked in now that Trump's bigotry is clearly a feature, not a bug. Is there a single policy that Trump stands for that isn't straight up standard Republican stuff? The only thing I can come up with is trade, and I don't see trade policy carrying the day with the rubes Donald "I love the poorly educated" Trump appeals to. He's all yours, Republicans.You got what you wished for.

Gout is hip now. I'm not sure how I feel about this. Hip, I guess.

My CD player conked out a few months ago. I eventually got around to pulling it out of the system and taking it to a shop to be repaired right after Thanksgiving. It was sort of a silly thing to do-- I could have bought a perfectly adequate new machine -- actually, probably an upgrade-- but that didn't seem very green. Then came the re-install, a two day job that required two hardware store trips.

The set-up is housed in a massive piece of furniture which was once a cabinet in a classroom. It's about ten feet tall, with glass doors, and in addition to the turntable, CD changer, tape deck and receiver it holds a substantial part of Big Pink's vinyl and CD collection. When the repaired CD changer returned it became clear that everything was going to have to come off the shelves, and the wiring was going to have to be re-channeled. Seeing as I was doing it anyway, I also installed a preamp for my turntable.

Was it worth it? Holy crow, yes. The sound quality is like the difference between a car radio and a live band, particularly on the now stepped up turntable.