On June 11, 2016 I dropped my iPod Classic and it stopped working*. I took it to a shop to be repaired but they said it was broke for good. It's been sitting in my office since, with the thought that I might try sending it to Apple. The other day I decided to try charging it and low and behold it worked! This made me extremely happy. There is music on this device that I haven't heard in the ensuing years and I am glad to have it back in my life.

It is an appealing device that feels good in my hand, but it's funny how obsolete it has become in such a short period of time. It does not have Bluetooth connectivity, so in order to listen to it I need to use hardwired earbuds. It doesn't take photographs, or give me directions, or tell me what the weather is going to be. I can't use it to text or make phone calls. It just plays music, and although it holds a vast amount of music- over 8,000 songs it says, and that's less than half of its 160 gig capacity- my phone and my iTunes subscription allow me to download and play very nearly anything I can think of. So here it is, a relic.It is, in fact, so outdated that current versions of iTunes require downloading a plug-in in order to synch with it.  I think a lot about how technology has affected our relationship to music, and how it also affects how artists communicate their vision to us, and this is one more example. The LP gave us up to 20 minutes plus, which meant that longer compositions became possible; cassette tapes made mixtapes a genre. The Walkman made portability simple. CDs expanded the amount of music one could play without having to stand up and put on something new. The iPod returned us to single songs, and now we are living in the vinyl renaissance.

I'm not sure how I am going to use my resurrected iPod, although I may start taking it on long trips to help conserve the battery on my phone. I'm glad it's back 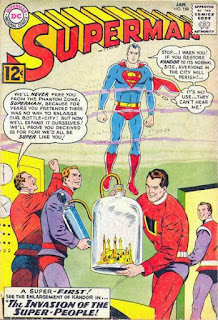 Watched an episode of The Adventures of Superman last night in which a scientist synthesized (or possibly refined) Kryptonite. In the story this was the first time Supes had encountered it. Subsequent developments suggest that the Earth is lousy with it, and it occurs to be that there are a lot more people from Krypton around than is generally assumed as well. I'd like to see a breakdown of Superman stories some day. You have your secret identity tales, and bad guys who think they have a gimmick (in the comics that's mostly Lex Luther, but there are others). Sometimes there's a menace from outer space, and every now and then (every 90 days if I recall correctly) Mister Mxyzptlk shows up. Also time travel.

Time for Oscar Picks! From time to time I write about movies elsewhere, but this annual exercise is always fun to do.

My favorite parts of Super Bowl Sunday involve Mr. Ed's Super Bowl Warm Up and Bruce Eaton's Art of Jazz. Over the years Mr. Ed's has evolved into an event that Jim Jarvis and I run annually, and bring a Special Guest to. This year Jim brought his sister Wendy, and I brought Caroline's husband, Jared. Jared proceeded to win his age group by an impressive margin, thereby making the rest of us much faster, on average. I made it home in time for a fast shower (something had to be fast), and then on to Christian Sands and his High Wire Trio. For the next two years, while the Albright-Knox is under construction, this series is being held at Kleinhans' in the Mary Seaton Room, a beautiful venue. Sand's set was a tribute to Erroll Garner, so there were a lot of complex, melodic piano fireworks, which was cool. Garner's work reminds me of Art Tatum in a way- not so much in sound as in the fact that neither are noted for who they played with. They both are, in the truest sense, solo artists, even when backed by a trio. Sands gave his collaborators some room, but I'd have liked a little more give and take. The set also featured recorded clips of interviews with Garner and other luminaries, so it had documentary feel to it that I was not crazy about. Even so, it was great performance, and a great day overall.