Well hey, Greil Marcus' Real Life Top Ten is back! In his Paris Review interview James Thurber relates an anecdote about Harold Ross which I think of every time I read anything by Marcus:


I once wrote a piece called “The Beast in the Dingle” which everybody took as a parody. Actually it was a conscious attempt to write the story as [Henry] James would have written it. Ross looked at it and said: “Goddamn it, this is too literary; I got only fifteen percent of the allusions.” My wife and I often tried to figure out which were the fifteen percent he could have got.

I'm doing pretty well if I get 15% of any given piece of writing by Greil Marcus; sometimes I think he is actually making 75% of it out of whole cloth, a sort of avant garde experiment in criticism, like Nabokov's Pale Fire.

Spent last night trying to explain substantive due process to my class, a task made more difficult by the fact that the concept is essentially incoherent, at least as it has evolved.

Wouldn't you like to know where Dennis Hastert got all that money? He was a high school wrestling coach, and then a congressman-- how'd he make that much dough?

Boz Skaggs at ArtPark might be fun.... Not much else on that lineup excites me.

This Facebook post, by my friend Steve Rudner, makes me so proud that I stand with him:

Although last night's returns disappointed me I am firm in my belief that Senator Sanders is doing great work. I let my expectations run away with me, but he is still pulling HRC in the right direction, and he is still engaging people who have never been engaged before, or who have been apathetic for so long that they'd forgotten how to care. It was exciting to hear people greeting each other by saying, "Did you vote yet?"

The numbers tell the tale.  In Erie County it came down to 705 votes, less than a percentage point. That's pretty amazing when you consider that the institutional Democratic Party here came out early for Secretary Clinton, and worked it hard. 7,714 Democrats came out in my district, which seems light. Amherst, which I'm guessing is where most UB students who voted locally live, had a pretty good turnout, but wasn't very close. There is a lot to chew on in this data. 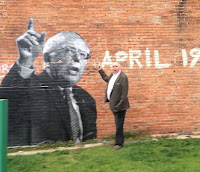 Number 66 at my polling place at 8:15 AM. My data suggests that this is a pretty strong turnout for a primary, but shy of a revolution: I've seen school board elections with high numbers.
Also notable: no Hillary signage and no signage for any Republicans. No local pols gladhanding, although there was a Sanders rep outside the polling place.

A. is pretty committed to the candidates she likes-- or even, as in the case of John Kerry, the ones she doesn't particularly like but likes better than the alternative. She's made it a practice to go out and canvass for the past three or four Presidential elections. Me, I talk big-- A. walks it. She is all in for Bernie Sanders this time, so yesterday I went with her to see what this canvassing thing is like.

I'd imagined it would be a clipboard and a lot of loose sheets of paper with the names and addresses of Democrats on them, but it is much more elaborate than that. There is a smartphone app into which one loads a code assigned at HQ. This reveals a list of "likely Bernie voters"-- persons who have been identified by some mysterious algorithm. The point of walking the neighborhood is to remind the likely Sanders voters that the primary is this Tuesday. We were given careful instructions on how we were to interact with each contact: ask for the person by name ("Hi, are you Skipper?"); identify ourselves ("I'm A. and this is Outside Counsel."); explain why you are there (We are here to talk to you about Bernie Sanders, a Democrat running for President. Are you planing on voting Tuesday?"). We were supposed to gauge each person's preference: Strong Bernie, Leaning Bernie Leaning Hillary, Strong Hillary, and enter it in the app. When we got strong or leaning Bernie we would remind them where their polling place was, and ask when they were planing on voting . Best case, we were supposed to get their phone numbers, so that the phone banks could reach out one more time. Hillary supporters got a, "Have a nice day." If they wanna know where to vote let them ask her.

We were assigned to South Buffalo, a Democratic stronghold, but one with a strongly conservative bent. The Buffalo School Board elections are May 5 (good scheduling job guys!) and there were a lot of lawn signs for failed Republican gubernatorial candidate and successful asshole Carl Paladino, but these didn't seem to correlate particularly with support or lack of support for Sanders, which seems consistent with the view that Sanders appeal is to the disaffected. Disaffected white people is a big South Buffalo demographic.

As we were wrapping up the addresses we'd been assigned we met a trio of college age people also out canvassing for Sanders. That's an impressive piece of logistics, I think-- the campaign was blanketing the neighborhood.

This very weird primary season is giving us lots to think about beyond the candidates. Could the Republican Party actually blow up? To what extent would the new party which would, I think, emerge, draw from Blue Dog Democrats? Why is it that the professional commentariat got most of it so wrong, and why are they still clearly not getting it?

I wonder about the path out. HRC is personally despised by the nutbars who run Congress-- if she is elected would anything change?

The question that has occupied my mind in recent days has been premised on an observation: the present mechanism the parties use for selecting Presidential candidates is profoundly undemocratic. Isn't it time to reform it? My present gig in the PoliSci department at BuffState has me thinking more like a political scientist than I have since, perhaps, I entered law school, but I still remember a lot of it. Our present nominating system came into being as an attempt to reform an earlier process -- or set of processes-- which started to break down at the Republican Convention in 1964, and finally failed completely with the McGovern/Eagleton/Shriver nomination in 1972. In fits and starts the two parties gradually devised a combination of regional primaries, caucuses and party conventions with the "superdelegate" overlay designed (or at least intended to) prevent the nomination of candidates thought to be outside of the mainstream of the particular parties core principles. This evolution is commonly expressed, by nitwits like Cokie Roberts or George Will, with the shorthand explanation that both Barry Goldwater and George McGovern were somehow fringe candidates that nearly wrecked their respective parties. There is no real social science basis for this narrative; it is, instead, a story that people tell themselves because they don't actually understand the dynamics of democratic elections.

Be that all as it may, it seems to me that the time has come to purge caucuses from our process. They tend to disenfranchise, and that should be reason enough.

UPDATE: I hadn't considered the structural aspects of the problem, and I should have. Primaries, for example, cost more than caucuses, and are paid for by the states.  Lots of states don't even want to pay for roads, so that's a challenge.

I met Tony Conrad when I joined the board of SqueakyWheel/Buffalo Media Resources in 2001. I was new to media arts at the time-- oblivious to Buffalo's rich history and (I blush to admit) unaware of Tony's work. Even so, it was evident every time he spoke that he was brilliant, and passionate and saw the world differently than anyone else. Best of all, he was adept at showing others new ways to see the world, and it was always exciting to be in his presence. He'd frequently give me a lift home in his beater van (as I recall it was a point of pride for him that he never paid more than $800 bucks for a vehicle). We seldom talked about what had gone on at the meeting-- he was always restlessly moving forward onto the next subject. What I remember best from those rides is that he would frequently pull out a Sharpie and make notes on whatever blank surface in the van he could locate: on the dashboard or the headliner, or the door panel, wherever. The interior of the van was full of his cryptic messages to himself. At some point he had an idea for an international poetry/interdisciplinary arts festival in Buffalo and my partner and I worked with him on setting up what the legal outline for such an event might look like. He was amazing, I was lucky to have known him, and I will miss him terribly

New Mexico does not pay its state legislators a salary. (They get a small per diem.) I would put it to you that one of the things that Article One of the US Constitution gets right is that it provides for legislative compensation. New York's legislature could go a long way towards improving its reputation for corruption-- and a long way towards eliminating corruption-- if it declared that its members could not have outside jobs, and I would argue that it could do so without increasing its members compensation. If all this did was to drive out the members who feel that they need more money to do the job it would be a small loss.

Home sick yesterday I set my phone to play the podcast of Moby Dick and drifted in and out of consciousness. My admiration for Moby Dick is well known in certain circles: I read it to my daughters at bedtime until each was old enough to cry, "No more Moby Dick!" The results speak for themselves, but I have never succeeded in persuading anyone else to try the experiment, although for a while I made the book a christening gift to select friends.  I have long maintained that it is the greatest American novel, and although there are persuasive arguments for The Adventures of Huckleberry Finn, or The Great Gatsby, I stand by that pronouncement. Damn, it is good.

Happy Don't Believe Anything On the Internet Day!