I probably shouldn't say this, but I suspect Bruce Springsteen's memoir is probably going to be kinda dull. Seriously, do you think he has stories he hasn't told in the songs? He's been a professional musician since he was what, 16? There was no down-and-out phase in his life, he has always lived clean, and he isn't likely to dish on other people. In fact, I'll take this further: At some point Bruce ran out of his own stories, and has been trying to be a rock and roll John Steinbeck ever since. I mark that point as arriving at The River, and I haven't found any Springsteen record after Nebraska to be all that interesting.

I wonder if it is even possible for the mainstream American press to cover an election intelligently. It all seems like Cokie Roberts murmuring that both sides do "it", whatever it is that day. The effect of this is to normalize stuff that is actually illegitimate by creating false equivalencies. At this point Congressional Republicans seem to be going all in on delegitimatizing HRC. They know they can't win, but with the press complicit they can obstruct her ability to govern. This happens because essentially no-one is prepared to critically analyze the policy proposals embodied by the two parties, and that is, in turn, because the Republican party really has no coherent policies apart from the policies that failed catastrophically during the Reagan, Bush and Bush administrations. It takes Democratic administrations a stone-cold eight years-- nearly a decade-- to undue the damage, and by that time the skein has been lost, and the electorate becomes focused on the trivia that the media reports. Emails, for chrissake. Decades old disproved rumors. The horrible thing is that the cumulative effect of the media's malpractice has resulted-- perhaps inevitably-- in otherwise rational people losing their perspective. My friend Lawrence Brose recalled that during his legal ordeal he found himself wondering, "What happened to my sense of critical acuity?" That's what happens under a barrage of attacks, even if the attacks aren't directed at you. Our collective sense of critical acuity becomes collateral damage. "Just. Make. It. Stop." our mind screams.

So long, Rudy Van Gelder, and thanks for all of it.

An oddity: a Dylan outtake from Infidels about the Rosenbergs. Rocks along pretty good, but the politics are maybe half bubble off

I have only been to one National Park. I suppose I should get on that. 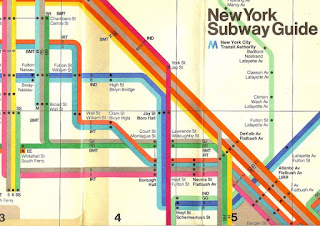 There was a time when I considered myself an expert at the NYC subway, but it's changed a lot and now I regard myself as merely adept. The torch has passed, and now it is LCA who is the subway ace. It is an arcane knowledge, but she seems proud of it. She has a gap in her nomenclature, however: she insists that nobody uses the terms IRT, BMT and IND any longer-- and adds that the trains are nearly exclusively referred to by number these days. This seems wrong to me-- the Lex, the Broadway Local, the Sixth Avenue Line-- these are vital descriptors. I'm still vexed that the system no longer uses double letters to denote local trains on the BMT and IND lines.

I'd forgotten that Pierre Teilhard de Chardin was mixed up in the Piltdown Man hoax. 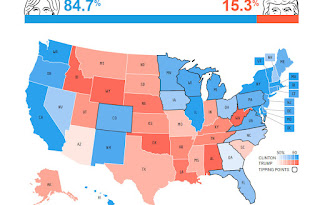 This is Five Thirty Eight's electoral map for today. Yesterday had Arizona a bit bluer, and that makes sense to me: Mormons vote, and they are not going to vote for Trump. I feel pretty good about Georgia, too. Atlanta is the capital of Black America, and turnout there is liable to be strong for HRC. It seems to me that the Democratic strategy going forward should be to force Trump to play defense in places like Missouri and Indiana (former EGC states!).

Interestingly, to date the Trump campaign has spent Zero ($0) Dollars on television advertising. I suppose message control is not so important when your message is out of control, but it is notable-- a data point on an election season that saw the guy who ran on a platform emphasizing the corrupting power of money out fund-raise the mainstream candidate. A "self-funding" "billionaire" isn't all that odd, so why would we be surprised that he isn't spending money?

Continuing in an automotive vein for just a moment, CLA reported that the tire pressure light came on as she was coming in from Rochester for a visit, so I went with her to Delta Sonic to check it out. Checked the air, ran it through the wash, filled it up and bought her an iced coffee, so it was the complete Dela Sonic experience, and I was thinking that it was like a Chuck Berry song, you know? "Wipe the windows, check the tires, check the oil, dollar gas!" In actually it was just a dad outing, like a horrible Harry Chapin song. Nice to see CLA, though-- Kyacking, then "The Taming of the Shrew". The latter was much better than the review suggested it would be. For no good reason the players were dressed as pirates-- they might as well have been Pittsburgh Pirates for all that the context added anything-- but it was energetically performed, which is, I think, part of the key to making the play work. If it lags then you start to think of it as a play about spousal abuse, and that wrecks it. It is, I think, possible to understand it differently. One should start with a question that is never expressly asked: why is Katerina so ill-tempered? One reason that the text suggests is that she feels slighted because her sister is the favorite. Her behavior is reinforced because she receives attention and thus reinforcement when she behaves shrewishly. Petruchio shows her how unattractive her conduct is, and demonstrates respect for her cleverness and strong will. The two leads were excellent-- and a special shout-out to Bonnie Taylor, who was an excellent Kate.

I must have been about 12 or so when I can across a couple of big stacks of old Popular Science magazines that somebody had put out by the curb. They were probably from the late 50's and early 60's, and they were damn near as good as science fiction. A regular feature was a series of short stories about a small town mechanic named Gus Wilson. In each installment Gus would interact with a local character (the town miser frequently showed up) who had a mysterious car problem. Gus would ponder the situation, ask a few obscure questions, then diagnose and fix the issue. It was Car Talk basically, and I hadn't thought about it in years, but I just now did, and discovered that somebody has lovingly scanned them all, going back to 1925 and put them on the web. They are as good as I remember -- the clues needed to solve the puzzle are cleverly and subtly worked into the narrative, and the ending is always a twist. Having grown up with these stories I suppose I should know more than I do about car repair (functionally I know nothing about car repair whatsoever). I guess I just picked up on how narrative is structured instead. In any event, these are well worth dipping into

I think I will be looking into Thomas Reed Powell a little bit.


“If you think that you can think about a thing, inextricably attached to something else, without thinking of the thing it is attached to, then you have a legal mind.”