Screens are going to be the new reality in our glamour profession, and that will change more than we can anticipate. In some ways it may prove more expensive: pre-marking depositions, and the "meet and consult" requirements are going to take more time than we used to take. On the other hand, there won't be any more waiting around in the hall while the judge wraps up the case ahead of you. I never made it a practice to hang around in the courthouse any longer than I had to, but the sort of serendipitous meetings that occurred in the halls were one of the minor pleasures of this business. That's gone now, and I will miss it.

David Crosby is probably the most irritating member of Crosby, Stills & Nash (we can leave Neil out of it for the moment). That said, If I Could Only Remember My Name, for all of its hippie wistfulness, is an album that never fails to sooth when called upon to do so, and that's no small thing. I resist nostalgia but I can't listen to it without connecting to the person that loved it when it was new, and that is a pretty great artistic achievement.

The key to Superman's Fortress of Solitude is a aviation marker, and that always puzzled me. Now I know what that is, and that there are still some in existence.

On my list of things that should inspire massive cognitive dissonance: Log Cabin Republicans and Republican fans of Bruce Springsteen. The latter are apparently unhappy about Mr. Springsteen's Superbowl commercial for Jeep. (There are also Springsteen stans who  object to their hero making a commercial at all, but that is a separate stupid issue to have over something so trivial.) I went back and had a look about what I've written about Springsteen over the years, and was surprised at how much there is, particularly in view of the fact that I was pretty much over with him after The River. I'll give him this much: he knew he was going to have to stop writing about the life he'd lived in his 20's, and although I don't care all that much for the actual John Steinbeck I respect the work of both The Boss and the author of East of Eden

On the history of "Esquire". I never use it, personally. Elinore Klein was always disdainful of pretense in
our glamour profession, and I agree. Even though we are one of the learned professions it is an expression of our democratic ideals to resist titles. I once asked Ms. Klein if I could have a framing allowance for my admission certificates. "Lawyers don't do that," she said. "That's something doctors do." Fair enough, those scrolls are rolled up in a tube in a corner behind a cupboard in my office. I have, however indulged in the the plaque and portrait shown here: if it was good enough for William Nelson Cromwell I reckon it's good enough for me. 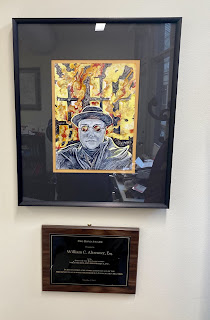 I frequently find that there is a strong anti-intellectual streak in our glamor profession, and it irritates the hell out of me.

At the moment I am litigating a matter with a younger attorney adverse to me. He seems like a bright guy, and I suspect that he comes from a politically connected background. We get along well enough. The other day we were having the sort of phone conversation that nibbles around the notion of getting to settlement discussions, and I said that we are probably at a place where we both want to avoid the sunk cost fallacy. "You're a professor, aren't you?" he said. "That's why I don't always understand what you're saying."

Now, first of all, I am not a professor, which is a specific academic title. Yes, I teach, but calling me a professor is a stretch. More importantly, there was nothing esoteric or, you should forgive the expression, professorial about my remark. Every capable lawyer I know got good grades as an undergraduate. Law is supposed to be a learned profession, and yet I frequently encounter lawyers who pretend that they are jus' simple folk.