Oklahoma and Nebraska have brought a lawsuit against Colorado which seeks to overturn The Rocky Mountain State's legalization of marijuana. This is pretty great for several reasons. The first is that it is an example of the rarely seen original jurisdiction of the Supreme Court in disputes arising amongst the several states. I love that.

The other part is that it illustrates an important political principle:


This strange little lawsuit against Colorado is so astonishingly hypocritical, so brazenly antipodal to Bruning and Pruitt’s professed philosophy, that even admirers of both men are aghast. Case Western Law’s Jonathan H. Adler, the mastermind behind the latest Obamacare suit, noted with disgust that “it is as if their arguments about federalism and state autonomy were not arguments of principle but rather an opportunistic effort to challenge federal policies they don’t like on other grounds.”

That's right, Professor Adler-- nobody really cares about "states rights" unless arguing for states rights allows you to screw over someone else's  individual rights. This would not have been news to Dredd Scott, but there is probably quite a bit that the late Mr. Scott could tell us about law and hypocrisy.

Some Outside Counsel highlights:

Two years probation. When Lawrence and I first talked about his case I told him that the criminal justice system is a big, slow machine that only grinds one way. Mercifully, after six years his outcome has left him bruised and abraded, but not crushed or mangled. Make no mistake-- this is a big win. Nearly a hundred people in the courtroom-- it was packed. A big thing was that at the end, when Probation asked about installing monitoring equipment on his computer the judge said, No, that they could access his computer if only they had reasonable suspicion that his use of the computer violated his terms of probation. That's huge, I think-- it tells us that he got it, that he understood that whatever was on the hard drive was there through no fault of Lawrence's. I'll be elaborating on all of this in next week's edition of The Public, but one anecdote that I'll share here and not there is this: after the court adjourned and everyone filed out into the hall, one of the Marshals came up to me and asked if my coat was in the cloakroom. I'm no amateur-- I know to take off my outer things before I enter a federal courtroom, so of course it was, and my fedora, too. He walked me back to the cloakroom, and told me that people were going downstairs to the main lobby. "If it was me," he said, "I'd be going somewhere to have a party." It was a good insight from a guy who has seen a lot of sentencings, and in fact that's what we did. We went to Hallwalls and toasted the courage and endurance of Lawrence Brose.

Today Lawrence Brose will be sentenced. Here is my story for The Public about what has happened so far, and what we might expect. 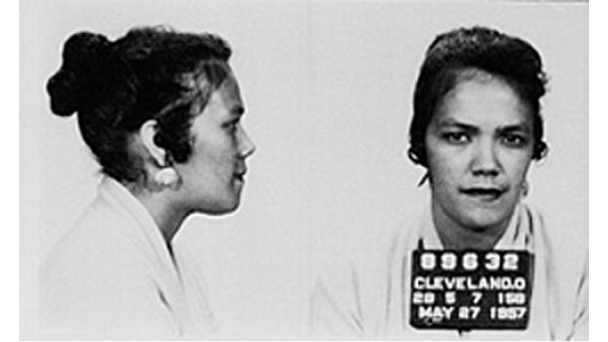 In many ways I believe that the story of America is a story about the Law., and one of the concepts that underlies my Lawyers in Movies project is that we frequently misapprehend who the real heroes of the Law are.  Part of what distinguishes the Common Law tradition from other legal systems is that ours is a system that is based on narrative: "The life of the law has not been logic, but experience," says Holmes, and one thing that this means is that we learn what the law is by telling little parables about it. Poor Mrs. Palsgraf, or the embittered and litigious Mr. Marbury. Mr. Miranda, or the irresistibly impulsive Huey Newton, these people are characters in the stories that we tell about how the laws that our nation is supposedly a government of came about; perhaps blind to the irony that our government of laws, not men is composed of laws named after people. Dollree Mapp has just died, one of those people whose name we all know. Until I found this photo I had no idea what she looked like. Come to find out the Cleveland cops busted her the day after I was born-- something else I didn't know. Actually, there is a lot about Ms. Mapp I didn't know. All Mapp v. Ohio tells us is that her home was searched without a warrant, and the jurisprudence of Fourth Amendment Exclusionary rules extends to the states. I didn't know that she was engaged to Archie Moore, or that she was connected to Don King somehow. (The police came to her house on a tip, looking for someone who might have known something about an explosion at King's house. What the found was a trunk with what they claimed was obscene material inside.)  I get the sense that her life was not an easy one, but there she is, a person who gave her name to a legal principle that makes America a slightly better place. Is Dollree Mapp a hero of the American Legal Narrative? That's not how we are taught the story in law school. When we read Mapp v. Ohio what we take away is that Justice Tom Clark, who wrote the majority opinion,  and the Warren Court, which decided the case, 6-3, were the heroes, the men (because they were all men) who forged constitutional protections into our law of criminal procedure that keep the magistrates on the stoop outside unless certain niceties are observed. I like to think that the real hero might be A. L. Kearns, someone I know nothing about whatsoever, except this: he argued the case for Ms. Mapp. It's one thing to decide a case-- even if the decision is potentially controversial. It is another thing altogether to take the case in the first place, and to craft the argument that makes it possible for the bench to get it right. I will raise a glass this evening in memory of Dollree Mapp, but it's A.L. Kearns that we should remember.

Sometimes I wonder just how many lies Americans can believe about themselves, and when I do I am never happy with the answer I come up with. Frankly, the Senate's report about CIA torture is not even the worst of it-- it sounds to me as though the Senate Intelligence Committee is scapegoating the Agency in order to give both Congress and the White House a little room. And another thing: for whom exactly is all this news? The United States tortured people-- I've know that for years. Torture did not yield useful information-- well, of course it didn't. Torture has detrimentally affected the perception of the United States abroad.   The perception! Godddamnit, the United States is a country with a policy of torture. That's not a perception, that's a reality. That's a reality just like the reality of our criminal justice system being so caught up in its own wonderfulness that it can't see the institutional racism which has compromised it since Reconstruction.