As work on the porch at Big Pink progresses we find that we are walking around looking for details that were previously exactly the sort of thing I never bothered to think about. McMansion Hell is a good place to train one's eye.

"To stay still would be a lie, and Bob Dylan on stage does not lie."

True enough. Of course, in interviews Bob Dylan lies like ringing a bell, but that's because he doesn't want to explain-- he wants us to listen.


Bob Dylan recognized, relatively early on in his career, that unless an artist takes an active stance to defend his or her right to evolve, investigate, and make music true to their own heart and memories, an artist becomes a reflection of their audience—not a reflection of themselves. Bob Dylan has never been interested in your idea of Bob Dylan; he is interested in his idea of Bob Dylan.

Exactly. Bob Dylan is Bob Dylan's greatest invention, and he knows it. He is fine with letting us in on this, but his lived reality is never going to be the same as the reality we may try to project on him.

The decline and fall of diner culture. When I was last in my hometown for the funeral of a classmate we gathered at the Peter Pan Diner, which is still where it has always been, and still has great fries. Even though Eddy and I had never had so much as a cup of coffee there, it seemed like a fitting remembrance for a lawyer who'd driven a cab for a while. The other Bay Shore diner of note was the Forum, on Montauk Highway. The Forum was fancier, and more expensive, an after Prom hangout. A little further east was the O-co-nee Diner, in East Islip, which was also kinda upscale, for a diner.

Luncheonettes were a different deal. I can't think of one that I've even seen in the last thirty years or so. In Bay Shore there was Hamburger Junction, and there were versions all over the City. I don't know if Chock-Full-O-Nuts qualify-- I think Chock-Full-O-Nuts was just Chock-Full-O-Nuts. You could get a nice slice of datenut bread at Chocks, with a schmeer of cream cheese.

I used to think that it was a shame that Badfinger never made a really solid entire album. I guess I never listened to Straight Up carefully enough.

Absolutely Sweet Marie, the song from which this blog takes its name.

I am in a Greil Marcus place at the moment.


Trump has created a government that on paper is only steps away from realizing the dream of generations—the repeal not merely of Obamacare—the name of which trivializes it, as if it’s merely one man’s vanity project, not national policy, part of the republic—but of the New Deal and everything that flowed from it, the repeal of any notion of the Federal government playing an affirmative role in national life, “to protect the general welfare”: the repeal, in essence, of 20th century democracy. That means Social Security, the FAA, the Food and Drug Administration, the Center for Disease Control, the National Weather Service, and countless other institutions of American life. It means the dismantling of laws and institutions against discrimination of any and all kinds, to the point, perhaps, of allowing states and municipalities to re-institute de jure racial segregation along with the abolition of abortion rights, the abrogation rights of women to legal equality with men, and the criminalization of homosexuality (none of that sounds that far away for me; that was the America I grew up in). It means the junking of the national highway system, a New Deal successor under Dwight Eisenhower, in favor of selling it off to private companies. It means the abolition of Medicare, the most important New Deal successor program, and Medicaid, the Head Start, food stamps, and a thousand other programs. Oh, pundits say, all of that will hurt so called red state voters, Trump voters, right where they live, and they’ll be outraged! No they won’t. They voted for this. They voted for Trump—not out of some narrow sense of what pundits call their own interests, by which is meant their own narrowly defined economic interests, but because Trump embodied the kind of country they wanted to live in and the kind of people they wanted to think they are—and they will support him again. Many people on Medicaid and so many other linked government programs don’t vote, and merely cutting a lifeline won’t lead many of such people to vote. That is at the heart of American electoral history. 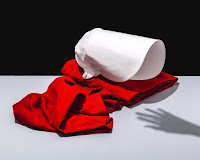 Billy Wilder (I think) tells us that voiceovers should only be used to tell us things that the camera doesn't show us. I suppose Handmaid is showing us that Offred isn't broken, that she is resisting, at least internally, and okay. The novel is told in the first person for just that reason. I still think it would work better without the interior monologue.

It is visually arresting, no doubt about that. The scene with the oranges is going to stay with me.

The world-building is very good. Still, two seasons of this? I'm really interested in the way that 21st Century television has opened up the cinematic possibilities in long form narrative, but can this story sustain itself over that many hours?

We are Margaret Atwood fans at Outside Counsel, and it is funny to think that this is the work of hers that will enter the canon. It isn't my favorite of her works-- that would be Cat's Eye. Is it her best? I have no idea how that would be determined. Someone once told Hogey Carmichael, "Nobody ever went broke writing songs about the South," and the same may perhaps be said of dystopian novels. Quick, name two other books by Aldous Huxley, you know?

Finally, a tangent. We went to see Wonder Woman over the weekend, and its affirming feminism is an interesting alternative to Handmaid in the Age of Trump. 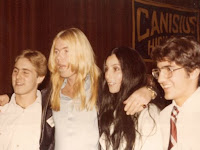 Tony Conrad, getting his props at last.